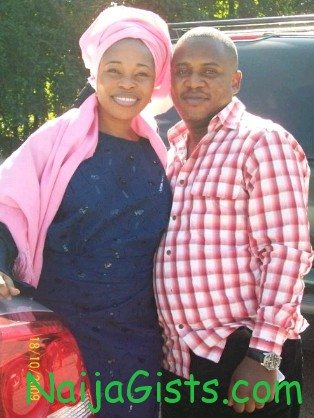 Tope Alabi, one of the pioneers of modern Yoruba Gospel music in Nigeria in an interview with Ediale Kingsley revealed how some ministers of God pester her for relationship among other issues. naijagists.com

I bless the name of the lord, for giving me this opportunity, for taking me from mere clay to where I am today, I bless his holy name, this is the 9th album, and this is not a launching, this is an unveiling, we just want to unveil it, nobody is going to launch, everybody is just going to pick their own, just give anything you like, even #500 is not small, even 200naria is not too small, I just want to bless God for taking me this far, it has been so rough, tough and I have experienced a lot of things, turbulence, if I can say, but yet bless the name of God, for making me stand up to this present time.

Concerning the situation of the economy now, not just the economy, the state and Nigeria as a nation, the insecurity and everything, is there a place for your album?

Yes, we are unveiling two albums here today, Agbelebu and Alagbara, Alagbara talks about what is happening in our country and Agbelebu is talking about our own personal life, because at times you know we use to talk about our leaders, saying they are not doing it right, because they are not supposed to be there, but what about our own area? Have we done our own part? So everything in Agbelebu and Alagbara is what God said I should tell people and am sure that people won’t be disappointed.

Two albums you said, considering the competitiveness of the music industry, I know Tope Alabi is a brand, I know she is not competing with another brand, how do you deal with the piracy factor?

There is nothing I can do, I believe in God. Talking about pirating and the rest, I would say, if you don’t have any good thing, nobody will buy it, it’s when you have a valuable product and people want to be blessed from your gift that they will even consider pirating and duplicating. Actually it’s really killing artistes, it is giving us a lot of problem, but what can we do? If God has not said no to them, they can’t stop, nobody can stop them.

How do you relax aside music, what other things do you do?

At times I just lodge in hotels for three to four days, at times I travel out, what I do most is watch films; I watch Yoruba films and American films.

What would you say about our Yoruba films now? When we talk about nollywood, I think Yoruba film is at the fore front, what do you think about the Yoruba film industry, most of them even use your music as sound tracks?

I think because there is no helping hand for them, you see them coming down little by little, it wasn’t like this before, they ought to have grown more than this, government are not helping them, marketers are not helping either, I think that’s why they are just there, and most of them are trying, that’s why I don’t want to leave them, aside that; God said I should not stop soundtracks, I don’t want to leave them, because I know, some of the movies, my soundtrack is there, people want to buy it because Tope Alabi’s music is in the film

Nine Albums is not by any chance an easy task so how have you coped and managed to come up with such an impressive feet?

It is God, He inspired me, God tells me what to do at every point in time, and it has been three years now since I have been on this particular album, I waited for God to talk to me, so it is God.

Who writes your music?
God, He dictates for me, while write down.

How do you get inspiration?

It is God, God gives me the inspiration, and this is what I want to tell my people this time around, like this Agbelebu, God gave me the title. There is no way that I would write that God won’t tell me the title, I pray and do fasting; wait for God to talk, at times I would be in the rest room, he will be talking to me, at times I would be sleeping he would wake me up.

If you were to pick a particular song of all the tracks in the album, which would be your favorite?
I would say the best is yet to come

What about the particular one we have now?
This one we have now, I will pick the track Agbelebu itself and I will pick Alagbara. In the industry (especially gospel), do you think there is unity among the practitioners and stakeholders. There is unity, in the little way we can, I make friends with all of them, I invited all of them here today, and if you don’t see any of them here today, maybe he or she doesn’t feel like coming, the bible says make peace with them, we have a society like gospel artiste society, but it failed, they are trying to come together again. I know God will intervene one day.

Are we expecting a concert, when do we get something like a concert from you?
I will have a concert in December.

Any other thing we should be expecting in the nearest future?

Expect from me a music school and that will come up say; in 2 years time. we have gotten the land already, we are just trying to build the place now, we want to teach people how to compose, we want to tell them that, it is not your brain that will bring anything out, we want to tell them, that it is God that will inspire you, you see some gospel artiste, will be cursing him, because they don’t know the meaning of the Yoruba, they are saying, we want to teach them God, who God is, they need to know their calling, some of them are not called to this area, they think they have the voice to sing, so they want to go into it, as if it is business, actually it is business, it is the business of God, but at the same time, you cannot do business with God anyhow.

Is it going to be restricted to gospel music alone?

No, it is going to be a music school, generally, but will teach them God too, when you are singing circular, you need to know God, singing circular does not mean you are a bad person, or you are going to hell fire, it doesn’t mean, Shola is not singing gospel, but she is making it.

You have definitely impacted lives, you have contributed a lot into music, what has music done for you?

Music has made me achieve what God wants me to achieve, that is, bringing more souls to him that is the only thing I remember and am happy for, am happy my music is touching lives, God wants me to tell people something, they want to listen and hear me out, that is my happiness.

You look quite astonishing, you look young and beautiful, and do you get people coming to pester you for a relationship?

There are some of them that wants to get to you by all means, whether you want it or not, but when they get to me, they use to see am not that kind of person, they will now become a member of my church.

The relationship is usually as if I have a church and they are members, so that’s what they become. Among them are a lot of money bags, they help my ministry now, they see me as prophetess, some of them even call me pastor, even there are ministers of God that pester me and say they want to get to me, but when they get to me and they see I’m not like that, they change, you are there to change life.

As you go out to get this album, I want you to know that all the things in the album, is for you, and don’t believe that because Jesus has carried a cross, that you won’t carry your cross, that is the meaning of Agbelebu.

You need to carry your own cross, to get to your glory place you need to struggle, to strive, to carry your cross and I tell you, you will get there very soon, do everything in your power to get going, everything worth doing at all is what doing well. Do what you have in your capacity to bless lives. God bless you.(interview culled from National Daily)