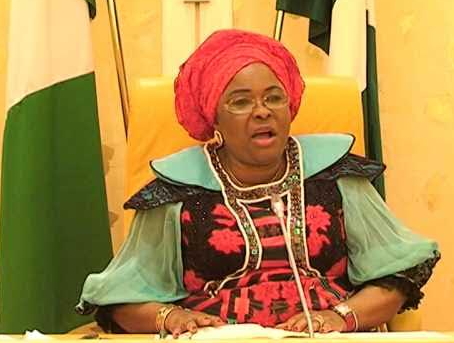 The former First Lady, Dame Patience Jonathan, has written to the Chairman of the EFCC claiming the ownership of more than $31 million found in various Skye Bank accounts. In an affidavit sworn before the Federal High Court in Lagos she claimed the money was for her medical expenses.

So Mama Peace claims the money was for medical expenses? Even though the whole of Nigeria finds this difficult to believe I don’t – she really needs a lot of money for her medical condition(s).

The sum she quoted for medical expenses is understandable when you realize she needs a full-time language therapist ( trying to teach someone to say ‘are you the only one who came?’ instead of ‘na only you waka come?’ can take forever!); an anger-management specialist( since she’s known to fly off the handle frequently); a travel-sickness specialist( since she spent most of her tenure as First Lady frequently jetting between Britain, Germany, Abuja and Bayelsa); an etiquette specialist and a relationship expert(after all she’s married to ex-President Jonathan Goodluck, PhD).

Now how she came about the money in the first place is still a mystery since the First Lady doesn’t earn anything and being a Permanent Secretary in the Bayelsa state civil service, at the same time (she was a superwoman who held down two jobs, one in Abuja and the other one two hundred kilometres away!) doesn’t pay that much. But yet again she could have dipped into her husband’s savings since she wore (and still wears!) the trousers in the house.

Considering the fact she believes that if ‘somebody come dash you something shay na payment be dat?’ she’ll have a hard time explaining to the EFCC boys who actually ‘dashed’ her such a colossal sum that enabled her to own a magnificent hotel and several luxurious properties. And what could she have done for this person or persons that they were so grateful to ‘dash’ her so much to spend on her health. As the First Lady of Nigeria wasn’t she entitled to free medical care anywhere in the world? Why did she have to, allegedly, pay for it out of her own pocket? And what treatment was she receiving abroad that cost so much? With the money found in her account she could easily buy a clinic in London or Bonn!

If she was ‘dashed’ this money she could have put it to good use since she obviously didn’t need it being the President’s wife. She goes on about how charitable she is and she could have donated this money to the under-funded IDP camps or to the Nigerian Health service.

If $31 million dollars has been found in accounts belonging to her meant for her medical expenses how much is going to found in other accounts, yet to be found or unearthed, for her travelling expenses?

4 thoughts on “Patience Jonathan And Her $31 Million Skye Bank Accounts, An Article By Tony Ogunlowo”