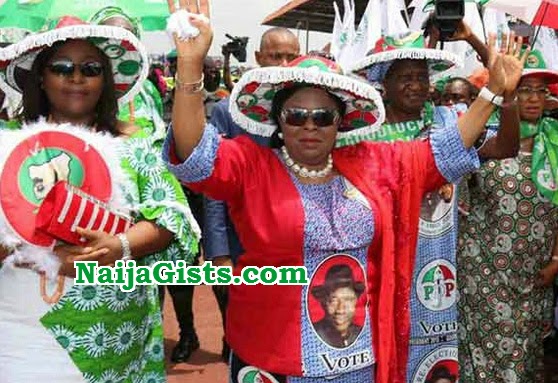 According to an exclusive story reported by punchng, First Lady Patience Jonathan has fled to the United Kingdom in order to escape being jailed by the incoming President Muhammadu Buhari whom she said is planning to send her to jail.

She was last seen inside Aso Rock on Saturday the 28th of March after her husband’s opponent was declared the President-elect.

A Presidency source who pleaded anonymity told reporters in Aso Rock on Easter Sunday that Mrs. Jonathan has travelled to the United Kingdom during the week to sort out some domestic issues.

“She is in UK. She may use the opportunity of the trip to visit her children,” the source said.

But contrary to the Presidency source, Mrs Patience Jonathan has no known domestic issue in the UK nor children of her own.

Her last public message was made in Ekiti when she lamented that the incoming President is planning to send her to jail if elected.

The fear of Buhari has now become the beginning of wisdom for Dame Patience Jonathan.

We will surely miss her grammar and stage drama.