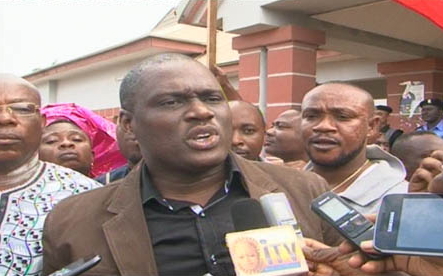 Some tenants who are members of the ruling party, APC in Esan NE LGA of Edo state are on the verge of being kicked out of their rented flats after their landlord, a PDP member ordered all his tenants to become members of the Peoples Democratic Party, PDP.

The landlord identified as David Agberemole reportedly urged his tenants to vote for PDP governorship candidate Pastor Osagie Ize Iyamu but those who voted for Osagie’s opponent, Godwin Obaseki got eviction notice.

One of the tenants who spoke in Esan said:

“We don’t have any problem, just party differences, he told us he wanted everyone in the house to support PDP because he is a member of the party but I refused.

I told him that I have been in APC for a very long time and that even if the PDP is buying me a car, I prefer to remain in APC and he said since that is my stand, I should consider myself evicted from his house.”

“I don’t understand why the landlord will just decide to drive us out of his house because we are not supporting PDP. I pay my rent regularly, so he was not fair to me”

Meanwhile, the State Board of Internal Revenue Service has given out cash and bags of cement to the evicted tenants in order to help them build their own houses.