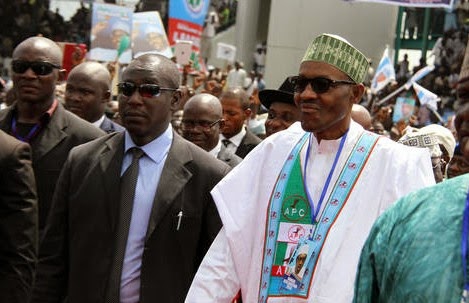 The Rivers State Chapter of the All Progressives Congress (APC) claims it has uncovered a plot by the Peoples Democratic Party (PDP) to use the police to clamp down on its leaders with a view to keeping them out of circulation during the forthcoming general elections. Rivers APC Chairman, Dr. Davies Ibiamu Ikanya, raised the alarm about the sinister plot in a statement issued Sunday in Port Harcourt.

“Our attention has been drawn to a sinister plot by the Rivers State PDP in conjunction with the Special Armed Robbery Squad (SARS) of the State Police Command to launch what they call the mother of all operations code-named ‘Operation Total Crippling of Rivers APC’ aimed at ensuring that none of our leaders walks the streets freely during the forthcoming elections,” Ikanya said In the statement.

“The strategy to be adopted is for the PDP leadership to come up with fabricated petition alleging that the 300 APC leaders to be arrested are cultists, kidnappers or armed robbers.

He alleged that Promise Wosu, the Head of SARS in Rivers State, to be assisted by Samuel Nwanosike a.k.a Ishi, is to ensure the success of the clamp down on the ‘ANTS’. It is also a fact that Ishi is the Head of Security of Wike’s Campaign Organisation aka New Generation.

According to the Rivers APC Chairman, “part of the strategy is to plant guns in the residences and business outfits of some of the leading APC Leaders and use the Police to search and arrest them accordingly. The Special Unit has already swung into action, doing the bidding of the PDP by arresting some of those in the 300-man list.

In this regard, Hon. Bouchi Nsirim was picked up at Aluu while addressing APC members going for the Buhari Rally last Thursday while Hon. Prince Adele Sam Wobo was picked up at Rumueme after a successful APC rally at Rumueme. Hon. Bestman Amadi was attacked at Rukpoku. Others arrested so far are Hon Tony Gboms, Alhaji Onukem and Hon. Charles Anyanwu-Caretaker Chairman, Etche Local Government.

Assassination attempt was made on Hon Wanjoku chikere Azubuike a member of Rivers State House of Assembly representing Ikwerre on the 28th of January at his residence in Port Harcourt while on 21st February, 2015 a combined team of armed personnels invaded his country home leaving tales of woes behind

In the eyes of this new marriage between PDP and SARS it is a taboo for anybody to be a member of APC and it is a higher crime to decamp from PDP to APC. That was the crime committed by Hon Rock Ahunaya, Hon. Roger Ahunaya and Romeon Ahunaya From Ipo Village in Ikwerre LGA as they were arrested without any charge for the heinous crime of defecting from PDP to APC.

Dr ikanya lamented that the crackdown is coming after the killing of 40 of Rivers APC members within two months, the bombing of the party’s secretariats in Okiika and Adoni Local Governments, attacking of the convoy of the wife of Governor Chibuike Amaechi, the maiming of the younger brother of Governor Amaechi, and the violent disruption of the party’s rally at Okirika on two occasions and the killing of a police man in the process.

Rivers APC appealed for the immediate intervention of the Inspector General of Police, IGP Suleiman Abba, and Rivers State Commissioner of Police, Dan Bature, before more damage is done to the image of the police.

“As we ask our people to remain calm and not do anything to assist the PDP in their devilish plot to plunge our State into a war zone, we plead with the international community and civil society organisations to come to our aide and prevent the genocide being planned against our people because of politics.

We ask our people to remain resolute and not be intimidated as the perpetrators of these acts and their collaborators will be brought to justice. No Matter the situation the siege will soon be over in a matter two weeks when General Buhari would have being duly elected as the President elect of Nigeria come March, 28th, 2015,” Dr. Ikanya said in the statement.