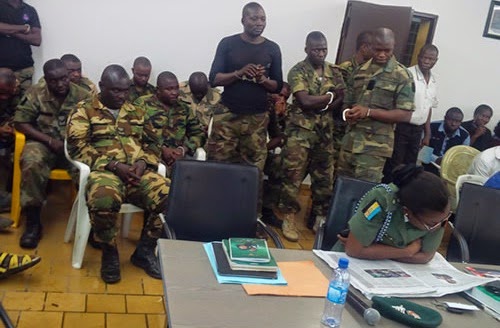 Yesterday a military court in Abuja found 13 out of 18 soldiers standing trial guilty of mutiny, a capital offence.

12 were sentenced to death by firing squad, 5 discharged and one jailed for 4 weeks with hard labour.

On May 14, 2014, the soldiers protested the death of their colleagues by firing shots at General Officer Commanding the newly created 7 Division of Nigerian Army, Maj. Gen. Ahmed Mohammmed, in Maiduguri, Borno State. The act is viewed in the military as mutiny.

In his reaction to the death sentence, the Editor of Ganifawehinmi Law publication Mr Oluwole Kehinde said that the convicted soldiers have right of appeal. He said they can approach the court of appeal.

“So far due process was followed in reaching the decision and there should not be sentiment about it. Any military personnel who is not satisfied or comfortable with the treatment in the military can disengage, mutiny and lawlessness should not be encouraged because a situation where lawful orders are refused portends danger signal,” he said.

Mr Paul Ogundele also agreed that the convicted soilders have the right of appeal subject to the constitution and article 7(I) of African Charter. If there were loopholes in the proceedings it should be revisited. This cannot be like the military regime with draconian law where people were executed when their appeal was still pending.

Chief Benson Ndakara in his reaction said the soldiers can appeal. “We are in civilian regime, though it had been alleged many times that there are moles in the military if due process is followed the law should take its course.”

Former secretary General of Lagos branch of the Nigerian Bar Association Mr Ike Ukor says mutiny is a serious offence that carries capital punishment. “Was the tribunal properly constituted? Was due process followed? all these ingredient will form basis of appeal if due process is followed the will take its course.”

These soldiers are overwhelmed, they are working with less sophisticated weapon and being set up by their commanders.

It is pathetic that these frustrated soldiers are being sentenced to death while Boko Haram suspects are still being freed on a daily basis with the influence of their powerful sponsors.

When last did we hear about the death sentence of a convicted Boko Haram suspect???, what happened to Ogwuche who killed over 75 people at a car park in Abuja, what about other Boko Haram suspects??? Lawlessness is reigning supreme in this country.