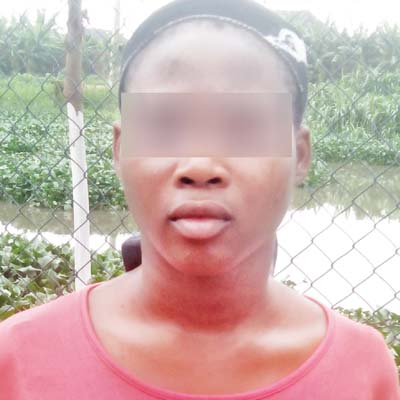 Miss Blessing Bassey Okon from Etop, Akwa Ibom State was an innocent girl who was forced into prostitution at the age of 13, a time she was sup­posed to be under the care of her par­ents. Her father died immediately af­ter her birth and thereafter, her mother remarried and left her with her moth­er- in-law who could neither feed her well nor train her due in school.

That therefore, created a loophole and made her feel rejected. At a point, she started to seek a better parental care. Her grandmother, who was tak­ing care of her tried her best and was hoping to get a support one day.

Coincidentally, an offer came and it was that of a professional prostitute who disguised as a businesswoman. The woman who stays in Calabar and a relation traveled home and con­vinced Blessing’s grandmother that she needed someone to assist in the shop where she sells rice.

According to Blessing, the young lady gave her grandmother N4000 and took her to Calabar. “When that Aunty came to my village to pick me, she deceived my grandmother that she had a big rice shop which she wanted me to manage. She gave my grandmother some money and the old woman asked me to go with her. In fact, I was very happy because I wanted to leave the village to an ur­ban area, so I would have the oppor­tunity to engage myself in one trade or the other, since there was no one to support me”, she stated.

Blessing also explained that on get­ting to Calabar, her madam, instead of taking her to the shop where she would manage, she was taken to a hotel room for prostitution. “Unfortu­nately, it was when we got to Calabar that I understood that what I went to do was prostitution. She showed me a room and instructed me to ensure that I deliver enough money to her other­wise I would die of hunger. I felt bad and wondered what to do. After much thought, I remembered that I had no option than to obey her directive. So grudgingly, I started the job.

I wanted to report to my mother and grand­ mother what I was going through, but due to lack of mobile phone, I could not. While doing the job, I used to de­liver between N10, 000 and N20, 000 to my madam on daily basis. It was from the money that she feed me and pay for my room. Sad enough, I was not given any cash, even when I was the one who used my body to make the money”, she said.

As God would have it, Blessing managed to hide some money from what she made to buy a phone worth N2,000, so as to narrate her ordeal to her family members. She ended up be­ing disappointed when she called and explained to her grandmother her con­dition but she encouraged her to go on. “When I reported to my grandmother that the lady she gave me to later intro­duced me to prostitution business, she was not bothered, rather, she advised me to try to cope, in order to survive the hard times. From her statement, I understood that it was a planned work. She even later gave me one of my sis­ters to join me in the business.”

Like other prostitutes, Blessing was busy hustling for customers and mak­ing some money for her madam. But one day, some policemen stormed the hotel and arrested her for being in the business as an adolescent.

According to her “I was in my room when some policemen came. When they saw me, they were surprised because of my age. So, they arrested me. the following day, my madam sent someone to bail me from the po­lice detention. When I left the station, a woman I did not know took me to her house and was giving me food. I was really satisfied and comfortable than the place I was. At a time, her son started abusing and beating me for eat­ing their food, without doing anything for them. As a result, I left the place and went home to inform my mother, instead of discouraging me, she also encouraged me probably due to the bag of rice and other items I gave to her. So, when I returned, I decided to leave my madam to be on my own. Thereafter, I started going from one hotel to the other and was making some money, but could not see what I did with it.”

Though Blessing was into the busi­ness, her spirit was not there as she prayed on daily basis for God to re­move her from there to a better place where she would have a rest of mind and be proud of who she is. “While in the business, I contacted HIV from one of my boy friends. Even at that, I was still having sex with several men. But I do not know whether they also contacted HIV or not. At a stage, I be­gan to get worried about my condition and a possible way out because I could save money to do any reasonable thing from what I was doing. So, one day, some church people who introduced themselves as members of The Lord’s Chosen Charismatic Revival Minis­tries in Calabar came to preach to us in our hotel. Their message centered on repentance. And as they preached to me, I was touched to heed their advice to leave the job and join them, but an­other mind told me not to go. But after much thought, I made up my mind to follow them to church.”

Initially, when she joined The Lord’s Chosen in Calabar, Blessing was not still free. “Even when I joined The Lord’s Chosen, the demons in me were still at work. And, I was fighting with some members regularly, on little provocation. But the members ad­vised me not to do such things in the church, yet I did not listen. One day, I prayed God to remove the demons in me and those in my siblings because we are known to be troublesome peo­ple in our community. Good enough, I was managing myself to attend the Church and they were really working hard to deliver me.”

Blessing’s turning point eventu­ally came when she was brought to a recent programme organized by the church in Lagos. “I was brought to The Lord’s Chosen Crusade in Lagos from Port Harcourt on Friday, June 10, 2016 by their members. They sent me to Port Harcourt branch from Calabar. Then from there, they brought me to Lagos for this programme. When the 2-day programme started on Saturday and prayers were offered, I felt re­lieved of the problems I used to have. I also noticed that the HIV has disap­peared because I do not notice some of the symptoms I used to have. What is left is for me to be tested to be medi­cally sure.”

The young girl who has denounced prostitution asked God and those she has offended in the course of her business to forgive her.

“I want God to forgive me. I also want those I have wronged to forgive me also. I want to start a new life. I want to be a child of God and do not want to go into prosti­tution any longer. So, what I need now is a job and accommodation to enable me take care of my self.”