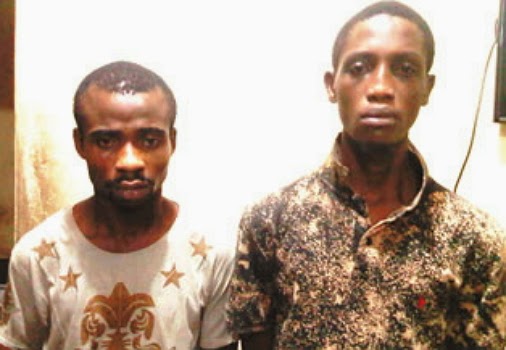 2 young men have been arrested during a foiled robbery operation in Alagbado area of Lagos.

The suspected robbers were caught by residents on December 5, 2014 and handed over to police at Alagbado Division.

Two of the 3-man robbery gang identified as Edward and David were nabbed while the 3rd  one simply identified as Kelvin is still at large.

The police said they recovered 7.65cm live ammunition from the suspects at the scene of the operation.

One of the suspect, 20-year-old Edward, an indigene of Egbema in Rivers state said:

“It was only Kelvin that had a gun. The two of us only had knives. It was about 7pm when we got to the house. We met a woman with her four children and we asked them to lie on the ground.

“We held the woman by the wrapper and she thought we wanted to rape her. She ignored the gun and ran out of the building, shouting to attract attention.

“When we saw that the people were gathering, we ran out and Kelvin escaped. I was pursued and was eventually caught. The residents wanted to lynch me, but a few others prevented them and advised that I should be taken to the police station.”

“I dropped out of secondary school in Junior Secondary School 1. My father is dead and I have four siblings. I agreed to go out with Kelvin and David because I needed money to give for my mother to take care of my younger ones,”.

“I was a commercial tricycle driver. At a point when I could no longer cope financially, I sold my tricycle for N80,000. When I met Kelvin, he said we could go on the street and make some money since he had a gun. He was the one who led us to the house of the victims. But he managed to escape that night.

“He told me he was travelling to South Africa and he needed money to complete his visa processing. I knew I was foolish for going with him, but it was because of my financial condition.”

Police claimed that the suspect injured one of their victims and attempted to rape a woman in front of her children.