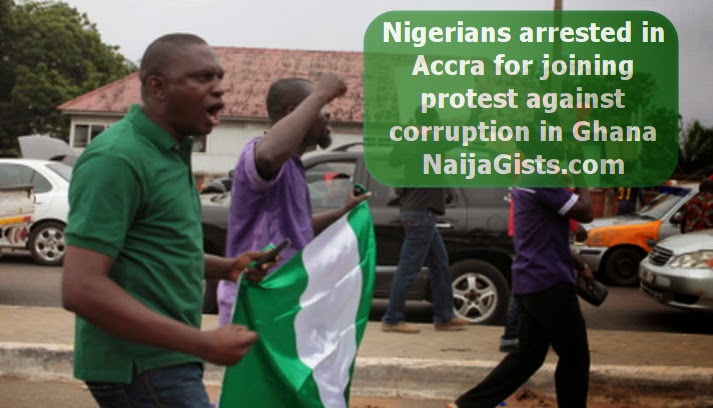 2 Nigerian guys based in Ghana were arrested last week for joining Ghanaians in a street protest over corruption in Ghana.

According to Sahara Reporters, the demonstrators were protesting corruption, a failing economy, and a high cost of living but police said foreigners have no right to join in a protest of that nature.

“It was not for other nationals to join,” Joseph Obenefo Darkwa of the police CID told the press, but one of the two Nigerians also responded that they were only showing solidarity with Ghanaians, who they consider brothers and sisters. He said they also found it imperative to join because the two countries have similar problems.

“We are comrades from Nigeria. We are protesting fuel prices hikes. We have undergone similar things in Nigeria around January. We believe in a united Africa. Nigerians and Ghanaians, we are brothers. Whatever affects Ghanaians affects Nigerians. So we are here in solidarity with Ghana.”

The police however did not take this for an explanation, calling their behavior “offensive” and an affront to national sovereignty, holding the two in custody.

The two held the Nigerian flag side-by-side with the Ghanaian one, singing their own songs.

Earlier, a security expert at the Kofi Annan International Peacekeeping Centre, Dr. Kwasi Aning, had predicted the possibility of the demonstration being infiltrated by troublemakers, but it is not yet clear if the two represent any such constituency.

Police say they have begun profiling the two gentlemen and are investigating the matter further.

These are the same people who closed down several shops owned by Nigerians claiming that we are not allowed to run businesses in their country.

Na wa ooo but Nigeria has never arrested any Ghanaian for doing such.

17 thoughts on “Photo: 2 Nigerians Arrested For Protesting Corruption In Ghana”