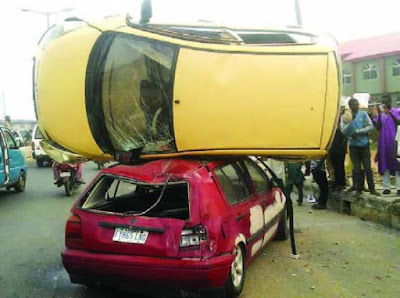 3 persons escaped death in Osogbo, the capital city of Osun state yesterday while returning from a night club.

The 2 occupants of the yellow Hyundai car pictured above escaped without injury while a lady sustained minor injury after the vehicle with Lagos registration # FST 779DG hit the curb while on top speed.

It somersaulted and landed on the red Volkswagen car parked by the road side.

The incident happened at Ayetoro Junction along the Osogbo Ikirun Expressway in the wee hours of yesterday, Saturday the 17 of December 2016.