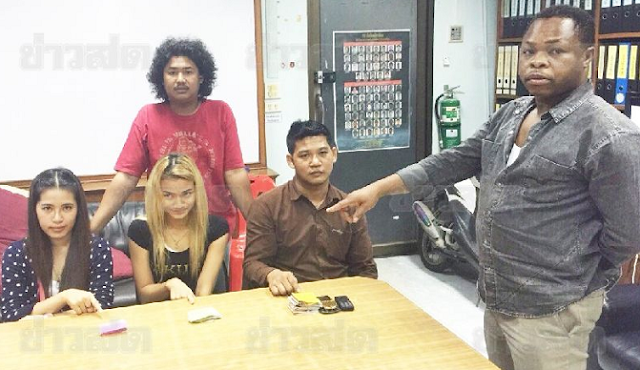 A Thai man and two Thai women have been arrested in Bangkok, Thailand for robbing a Nigerian national of his cash and valuables worth 130,000 bahts (about N760,000).

The three suspects were arrested early Friday according to Pol Maj Gen Nipon Charoenphol, deputy commissioner of the Metropolitan Police Bureau, while at a press conference at the Bang Na police station reports Thai Visa News.

One of the suspects, Chananthida Khampae, 21, was arrested at the Seven Days restaurant on Srin Nakharind Road and Panida Booncharoen, 19, was arrested in front of the restaurant at about 1 am Friday.

The two later led police to arrest the third suspect, Sarut Phawasupanon, 32, who is also Chananthida’s boyfriend, at his houuse in Mueang Samut Prakan district.

The arrest was made after Obiora Vincen Izegbu, 36, a Nigerian, filed a complaint with the Bang Na police station at 1 pm Thursday that he had been robbed by a taxi driver and two women early in the day.

The Nigerian man told police that one of the suspects is a taxi driver whom he hired to drive him on Wednesday evening. He said at some point, the taxi driver persuaded him to eat and drink at the Seven Day restaurant after which the two Thai women came to sit and drink with him.

After he got drunk, the taxi driver took the three to an Isaan food shop where they stayed until 5 am on Thursday.

He said he was completely drunk and the taxi driver and the two women took him to Soi Chalermphakiart 2, where he was robbed of Bt80,000 in cash, a gold necklace worth Bt45,000, a gold locket worth Bt22,000 and two smart phones.

Police later learned the identities of the two women, who admitted that they collaborated with Sarut to rob the Nigerian.