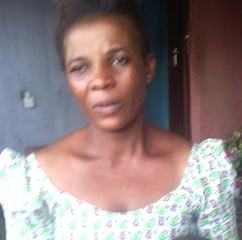 Meet 25-year-old Blessing Emeka Eze, a woman who has turned testimony into a full time business.

Yesterday, she went to a Four Square Gospel Church in Obawole area of Lagos to testify of how God delivered her 8-year-old daughter from kidnappers after 11 days in their den.

According to PM News, the domestic servant was nabbed by members of the church where she had gone to give false testimony that her daughter who was kidnapped at Ogba area of Lagos State was found at Mile 2 after 11 days.

She also told the congregation that precious told her that she was fed with raw food and raw meet which made the Pastor of the church, Rev. A.S. Adekunle to order that the girl be taken to a medical centre on Old Akute Road for treatment.

At this point, the doctor prescribed that she has to be on observation in addition to giving her drip to flush out any disease she might have contracted.

Again, her mother objected and demanded that the girl be given only injection.While the argument was on, two men came in and identified the woman and the same daughter as the person who gave a similar testimony the previous Sunday at Christ Apostolic Church in the same Obawole and the church donated N5,000 for her to take care of the child.

After she was threatened with arrest, she opened up and said the girl was not kidnapped as she alleged, adding that she was only using the girl to make ends meet.