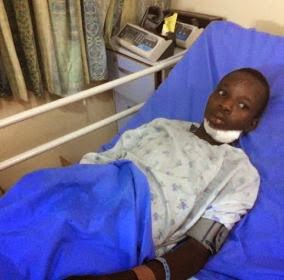 Kudos to the management of St Nicholas hospital in Victoria Island Lagos who rescued the accident victim pictured above from the grip of death.

The young man has been unidentifiable since he fell into a coma few days ago after a fatal accident that injured 15 people on the popular third mainland bridge in Lagos.

The victim has identified himself as Owolabi Akindujoye, a homeless bus conductor who sleeps under the Oshodi bridge.

The Ondo state indigene identified his mother as Mrs. Ramot Akindujoye, a herbal trader and his siblings as Emmanuel, Matthew, Suleiman and Usman. However, he didn’t mention anything about his father.

Sadly, none of his relatives have showed up at the hospital.

The hospital has promised not to collect a dime from his relatives.

Hope someone can identify him and notify his relations .