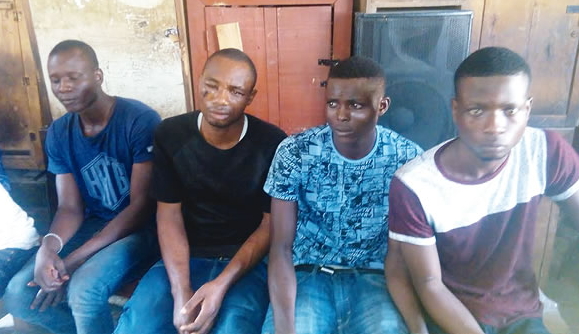 The Anti-Robbery Squad of the State Criminal Investigation and Intelligence Department, Yaba, has arrested a four-man gang that had allegedly been terrorising residents of the Ikorodu area of Lagos State.

We learnt that the suspects – Akin Ayotunde, Isaac Ogbonna, Sola Dede and Sodiq Lawal – specialised in lurking around houses at night and switching off their victims’ generators before attacking them.

They, however, met their Waterloo last Thursday when they were arrested after invading the apartment of one Bello Hakeem in the Igbe area.

Our correspondent was told that the suspects spent six hours in the victim’s duplex and went away with his car, generator, money, phones, Automated Teller Machine cards, modems, laptops and cash.

They also stole his wife’s jewellery and withdrew N100,000 using one of the ATM cards.

Hakeem told our correspondent that around 11.09pm on Tuesday, he observed that his generator suddenly went off and he asked two of his children to go outside and fix the problem.

“About five minutes after they left, they were forced back into the house by four men, who were armed with knives.

“They ordered us to cooperate with them. They searched the house and made away with three laptops, six phones, three ATM cards, a new 3.5KVA generator, one 75alms battery, two modems, jewellery, cash, and my Toyota Corolla. They held my family hostage for six hours before leaving at about 6am the next day,” he added.

Hakeem, an environmental scientist, said he reported the incident at the Ijede Police Station, adding that the suspects were able to withdraw N100,000 from his First Bank account before he deactivated all the stolen ATM cards.

He said two days after the incident, a friend called him that a car that looked like his own had been put up for sale.

He said operatives from the SCIID, Yaba, were alerted and the suspects were rounded up.

The four suspects, who confessed to the crime, said they operated with knives to avoid bloodshed.

Continue Reading
You may also like...
Related Topics:armed, family, robbers