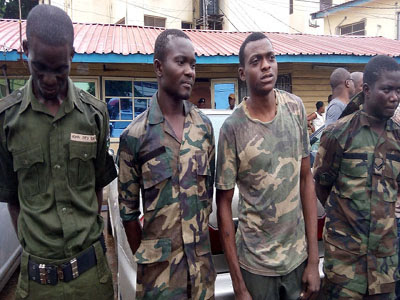 Anthony who was dismissed from service in January 2014 wore his uniform to avoid paying transport fare but unfortunately, he was arrested by soldiers.

Acha a Benue-born welder got into trouble after he wore his army brother’s camouflage T-shirt.

“I wore it. I was arrested for wearing the army T-shirt,” he said.

The last suspect, a member of Peace & First Aid Missions in Nigeria, John Otu went to secure his friend’s bail only to be arrested for wearing an army uniform.

“I wanted to go and sign my army recruitment form at Ojo Barracks when I bought the uniform at the Mammy Market. However, on October 7, my friend had a court case and I was to appear in court as a witness. The court was in Agege and I did not have the transport fare to go, so, I decided to wear my uniform to save me the cost of transportation.” – said Otu