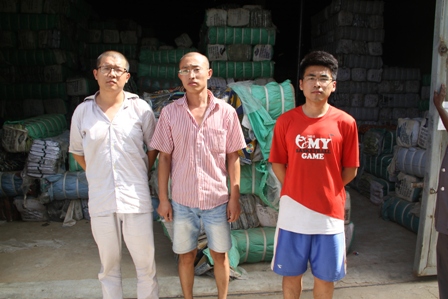 May 28, 2015 – 5 Young Chinese Men Arrested In Kano For Importing Textiles To Nigeria For Deportation

Chinese Textiles Smugglers Arrested For Importing N4.2Billion Textiles To Nigeria To Be Deportation

The Chinese businessmen behind the massive illegal importation of textiles to Kano are to be deported from Nigeria.

The fate of the businessmen was announced after a joint inspection visit to Kano by the Comptroller-General of Customs, Dikko Inde Abdullahi and the Comptroller – General of Immigration, David Parradang.

In a joint statement signed Wale Adeniyi Customs Public Relations Officer and Chukwuemeka Obua Immigration Public Relations officer of NIS, the two organisations noted that five Chinese nationals were involved in the operation of illegal warehouses in Kano, where prohibited textile materials worth billions of Naira were uncovered by Customs anti-smuggling operatives.

Comptroller- General of Immigratiommediate steps will therefore be taken to effect their deportation. Investigations are still in progress to ascertain the immigration status of the other two Chinese nationals.

The Comptroller-General further stated that the Service will intensify routine mop-up operations to ease out irregular immigrants. He added that those who are law-abiding and contribute to the national economic development through Foreign Direct Investment (FDI) and technology transfer will be encouraged and
given every possible assistance.

Reacting to insinuations that there are more foreign nationals doing illegal business in Nigeria, the CG Immigrations appealed to well-meaning Nigerians to oblige the Service information about such foreigners.

Meanwhile, a team of Customs Valuation Officers are still collating the textile seizures to determine the quantity and value.

Comptroller General of Customs, Dikko Inde Abdullahi said the team has concluded the exercise in only one of the seven five (75) warehouses that were sealed up by his men. Textiles items discovered in the warehouse according to him was valued at N4.2 billion.

He told reporters that the objective of the joint operation in Kano is about salvaging the national economy through the protection of the textile industry.

He said the huge seizure made through intelligence network cultivated over a period of three months shows that some illegal foreigners are sabotaging Nigerian economy through their illegal business.

Responding to questions on how the Service will handle the seized textiles, the CG Customs stated that in view of its sheer volume, the Service will make report to the appropriate authorities of the Federal Government to seek direction