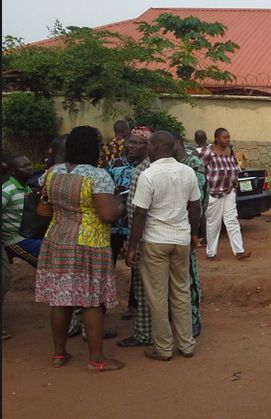 A young woman, Funmilayo Adeyanju, in a fit of anger hacked her three years old son to death on Children Day, throwing neighbours at the Ogunso area of Otta, Ado-Odo/Otta local government area of Ogun State into shock and mourning.
Adeyanju was said to have returned from somewhere and had barely rested for about 30minutes when she picked up a kitchen knife and attacked the boy.

She allegedly pinned her son called Emmanuel to ground and savagely stabbed him in the chest, abdomen, head and other parts of the body, leaving him to die in a pool of his blood around 4pm on Wednesday.

It is not yet clear what provoked the killing, but many people that are familiar with the circumstance of the mother and child, claimed it may not be unconnected with the trauma of the relationship between the woman and her biological father.

We gathered that the boy is the product of the incestuous between Funmilayo and her father about four years ago.

The state’s Police Public Relations Officer, Olumuyiwa Adejobi, who confirmed the incident, said policemen from Ota Division have arrested the woman while the remains of her slain child have been evacuated to the mortuary.

Adejobi said: “Policemen have been to the scene to recover the body of the child. The woman has been acting strangely like a person who is of unsound mind. The police would carry out proper investigation.
“The police will work on the state of mind of the woman and we’ll have to seek the help of an expert to know her mental state.”