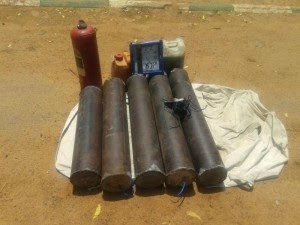 Check out the above timed bombs planted at the entrance of a Winners Chapel church in Owerri Imo state last Saturday by suspected terrorists.

After a vigilant security operatives in the church discovered the Improvised Explosive Devices (IEDs) in the early hours of Sunday, anti-bomb squad were immeidately dispatched to defuse the bomb

Because of the security threat, the church service was relocated to another part of Owerri yesterday.

According to Owerri anti-bomb squad officials, the bomb was planted late Saturday night waiting for detonation during church service.

Six suspected suicide bombers have been arrested in connection to the suicide bombing attempt.

According to Police investigations, the suspects are all members of a Jihadi sect who came into Imo state to carry out the suicide bombing.

Cheating Kenyan Husband Posts Apology Letter To Wife On Newspaper
Nigeria Vs Iran 2014 World Cup Match 0-0. It Is A Draw