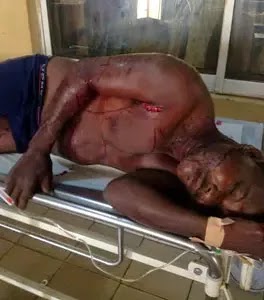 Pictured above is Mr Saturday Akpomose, a 45-year-old bus driver who escaped death last week after he was attacked by 7 German Shepherd dogs in Ajah area of Lagos where he had gone with his wife to visit his in-laws.

The timely intervention of residents who stoned the dogs saved Akpomose.

The case was reported at Ogombo Police Division, which referred the Akwa Ibom indigene to the General Hospital at Akodo, for immediate treatment due to the severity of his injuries.