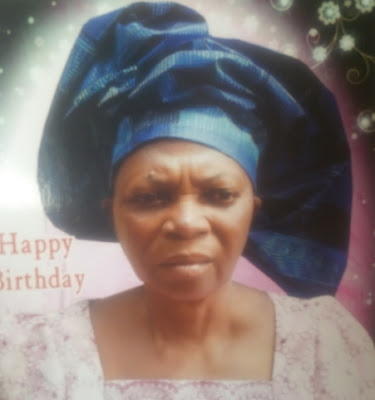 Pictured above is late Mrs Adetutu Ajayi who was murdered in her own home in Ado Ekiti on Tuesday.

According to family sources, the 73-year-old retiree of the Federal Ministry of Agriculture was home alone in Moferere area of the capital city when some suspected ritualists who have been monitoring her movement struck.

They reportedly smashed her head with an heavy object and removed her vital organs before escaping.

The late Septuagenarian was found in the pool of her blood in her 3 bedroom bungalow home when church members paid her a visit.

Her corpse has been transferred to EKSUTH mortuary for autopsy.

Her daughter, Titilayo said she became aware of the murder when church members who when went visiting because of her absence at a prayer meeting called her on phone.

The husband of the late woman, Pa Clement Ajayi,82, who lives in Irun Akoko in Ondo state said his wife’s murder shows that no one is safe in Nigeria.

He urged the police to investigate the murder and arrest those behind it.