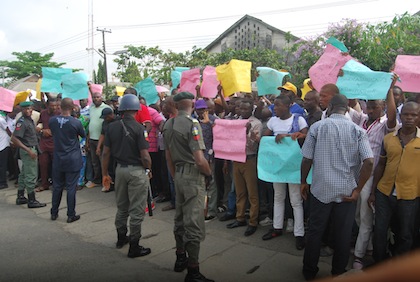 Key members of the APC in Oke-Ogun area of Oyo State on Monday protested alleged bias in the appointments made by Gov. Abiola Ajimobi.

The protesters, who carried placards with various inscriptions, were from the 10 local government areas in the zone.

The protesters took their case to the Governor’s Office at Agodi, Ibadan.

A party chieftain from the zone, Alhaji Ahmed Ayinla, said the protest was to express thier displeasure at current happenings in the party.

“We worked together and assiduously as a team to deliver nine out of the 10 local government councils to the governor for another term.

“The governor requested and collected lists for SUBEB Secretaries, Electoral Officers and Caretaker Committee Chairmen positions from the party across the 33 local governments.

“We submitted the lists, but they were not honoured in spite of the governor’s pledge to always consult the party before making any appointment.

“Many of our members suffered injuries during the election and are yet to be compensated.

“ Most of these people appointed are not members of our party,” he said.

A party leader from Saki West Local Government Area, Alhaji Kareem Adebayo, also said the alleged imposition of caretaker chairmen was an embarrassment to the party.

Adebayo added that it was wrong for the governor to pick the chairmen without proper consultation of the party, adding that party supremacy must be respected.

But addressing the protesters, Dr Morounkola Thomas, the Executive Assistant to the Governor on Political Matters, pleaded for understanding.

Thomas stated that the governor had constituted an elders council in the party to foster unity, adding there was no way some people would not be aggrieved.

He, however, pledged that the governor would look into their grievances.

Thomas assured party members that the local government election would be conducted and there would be credible primaries.

“The governor has inaugurated a committee to look into how a credible primary election in accordance with the constitution of the party will be conducted to pick the party’s candidates,” he said.