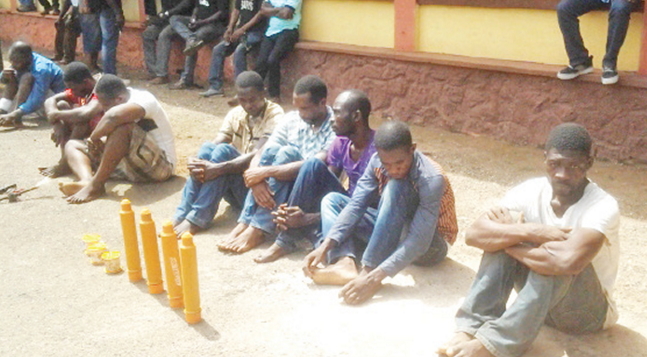 Ogun State Police Command operatives have foiled a planned bank robbery in Ijebu-Ode and arrested four suspected members of a robbery syndicate with explosive devices meant for the operation.

The state Deputy Commissioner of Police (Finance and Administration), Celestine Okoye, paraded the suspects at the state Police Command Headquarters at Eleweran, Abeokuta.

Ten other suspects, including a trans-border car snatcher, were also paraded for offences ranging from armed robbery, fraud, cultism and murder.

The deputy police commissioner disclosed that the suspects were coming from Delta State allegedly to meet another member of the syndicate identified simply as Wisdom, who was arranging the planned robbery operation in Ijebu-Ode.

Three of the suspects, Gelebele Aitlabor, Moses Demene and Friday Saborom, are indigenes of Delta State while the fourth, Mohammadu Kadiri, hails from Edo State. Okoye, however, stated that the case was still under investigation and would be charged to court at the appropriate time.

He said: “Information was received by policemen on patrol at Ayepe town that some members of a gang were seen with bags and on the receipt of the information, the suspects were intercepted by our team.

“On searching the bags, four explosive devices with three connective wires were recovered from them.”