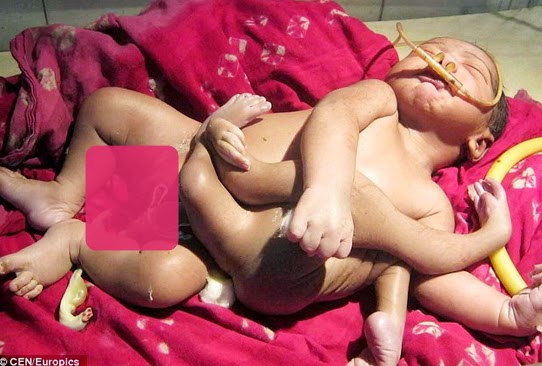 The baby boy pictured above was recently born in Baruipur, East India with 8 limbs.

The innocent boy has been called god boy by his parents who think he resemblances an Indian deity.

They believe he is a reincarnation of an Hindu god but doctors said the deformity on the child was caused by an underdeveloped co-joined twin.

The child has been named God Boy, as multiple limbs are common among Hindu deities, and people are travelling from across the region to the city in West Bengal State to get a glimpse of the child.

Local police complain they are struggling to control the crowds, as hundreds cry in the streets and clamor to get access to the hospital.

god boy’s family are filled with joy at their new addition. They see him as a son of Hindu God Brahma, who is depicted with 8 limbs.