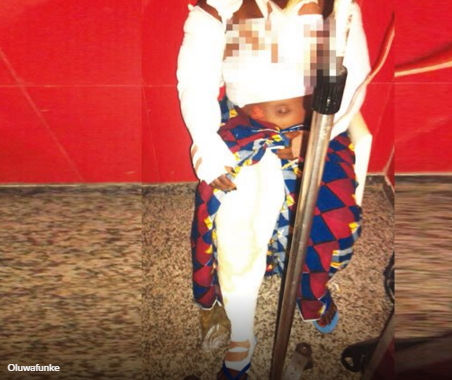 Oluwafunke Arogbonlo, a 32-year-old lady is in a critical condition at a specialist hospital in Port Harcourt, the Rivers State capital, after her sister, identified as Yemisi, allegedly poured hot water on her.

We learnt that the victim was asleep on Friday night at their house on Road 1, Federal Housing Estate, Mile 4, Port Harcourt, when the suspect allegedly sneaked into her room and emptied a bucket of hot water on her.

Our correspondent was told that the victim sustained burns from her neck region down to one of her feet.

It was learnt that Oluwafunke and Yemisi were stepsisters.

It was gathered that Oluwafunke’s mother separated from her daughter’s dad as soon as she was born, and she had lived with the father ever since.

He was said to have remarried a new wife, identified as Victoria, who gave birth to Yemisi and three other children.

Yemisi was said to be a student of Medicine at a ECWA Bingham university in Nassarawa State.

On September 2, we learnt that there was a disagreement between Oluwafunke and her stepmother, Victoria, and during a struggle, the latter was alleged to have fallen to the ground and hit her head against the wall.

Our correspondent gathered that Victoria reported the incident to her children, including the suspect, who was then on the campus.

She was said to have returned Friday, December 4, and pretended as if all was well.

Oluwafunke, who spoke with us from the hospital bed, explained that she never suspected anything after exchanging pleasantries with the suspect.

She said, “We greeted and I tried to explain to her that I did not touch her mother, that it was a misunderstanding and she wanted to hit me when I dodged and she fell. She told me not to bother about it, that it was gone and we should move on as sisters.

“I was asleep at night when she boiled water. She came into my room with a bucket of hot water and emptied it on me.

“I knew she was the one because immediately she did it, I opened my eyes and saw her. I was in pain.”

Our correspondent was told that the victim sustained burns to her neck, breasts, buttocks, chest and back.

The suspect reportedly took the victim to a private hospital the following morning.

Her mother, who lives in Lagos and pleaded not to be named, said she was alerted to the incident on Monday.

She said her ex-husband later moved Oluwafunke from the hospital to a specialist hospital for proper treatment.

She said, “I flew in on Monday night and immediately the plane touched down, I came right to the hospital. She has been in pain ever since the incident and although I learnt the matter had been reported at the police station, the police did not act until I got here and Funke’s friends went to make the report again.

“The police had to come to the hospital to take down her statement.”

She said the matter was reported at the Ada-George Police Station.

The suspect’s mother, Victoria, when contacted, said she could not speak to our correspondent on the matter.

She said, “If Funke’s people are saying she did not beat me up, then I cannot say anything. When they have told you the truth about what happened, then you can let me know. I am not going to say more than that.”

A Lagos lawyer, Spurgeon Ataene, condemned the act, urging the police to do their job.

He said, “A family feud does not give anybody the licence to pour hot water on the offending party. It is a barbaric act that should be condemned. The police should take this matter up and make sure justice is served.”