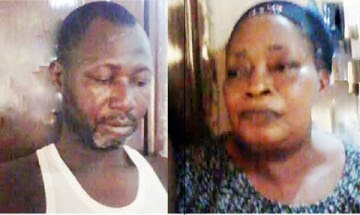 A popular Cherubim and Seraphim church prophetess in Iyana Ipaja has been arrested.

According to Lagos State Police Command, Prophetess Bola Ojo and a herbalist, Ismaila Abdullahi have been arrested for allegedly defrauding 2 bankers of six million Naira in Egbeda.

The suspects said the bank workers brought the money to them for prayers without being coerced.

They added that the bank workers wanted to perform ‘money rituals’.

According to the police, Ojo is the prophetess of a Cherubim and Seraphim church in the Iyana Ipaja area, while Abdullahi is a herbalist in the Egbeda area.

It was gathered that the suspects were arrested by operatives of the Special Anti-Robbery Squad after the victims wrote a petition to the Commissioner of Police, Kayode Aderanti.

Our correspondent learnt that the bank workers, whose names were not disclosed, had met one Ajibola, an alleged informant for the suspects, who is still at large.

Ajibola, posing as an aide of a renowned politician, had reportedly introduced a deal to them.

It was gathered that the worth of the deal was put at N5.8m, and Ajibola asked his victims to bring the money to a location with a promise that they would get fat rewards after the deal.

The bank workers were said to have withdrawn the said amount and headed for Samson Street, Oke Odo, Iyana Ipaja, where Ajibola had an office.

While at the place, Abdullahi and Ojo allegedly met the bank workers and hypnotised the duo.

The police said the herbalist allegedly gave the bank workers a soap and sponge to bath and collected the cash from them. The suspects allegedly fled thereafter.

Speaking with Metro, Abdullahi, 47, from Ilorin, Kwara State, said the bankers had come to him for prayer and assistance to become wealthy. He added that the money he collected was to purchase the materials for the ritual.

He said, “Yes, I am a herbalist. I was introduced to the bankers by my brother, Ajibola. What happened was that one of the bankers, a woman, wanted to perform money ritual.

“She came to my house in Egbeda for prayers. She also wanted to get pregnant, and she told me she was planning to start her own business, that she was tired of her work.

“So, she brought the money, which I graciously collected. I told her that I was going to buy the materials for the concoction which would make her pregnant and wealthy. That is the truth. I am married with four children. I was arrested in the Ilogbo area of Ogun State.”

Ojo, 65, said she was invited for the deal by the herbalist, adding that her role was to convince the bankers to pay the sum.

She said, “I am a prophetess of the C&S. I live in the Iyana Ipaja area. I have three children. What happened was that Abdullahi asked me to pray for the bankers.