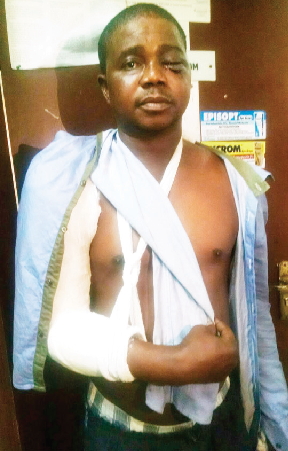 A danfo bus driver Idris Shittu is currently cooling off at SCID Yaba for allegedly attacking a policeman on duty during the last environmental sanitation exercise in Ketu Lagos.

One thing led to the other, Oluwasogo found himself dialoguing with Shittu inside the bus with registration number XX643GX.

He then drove him to a secluded placed in Alapere area of Ketu where he was thoroughly beaten and injured with an iron rod on his left eye and right shoulder.

Sergeant Adepoju Oluwasogo was later rescued from his abductor by other members of the task force patrol team.

He is presently receiving treatment at LASUTH, Ikeja.