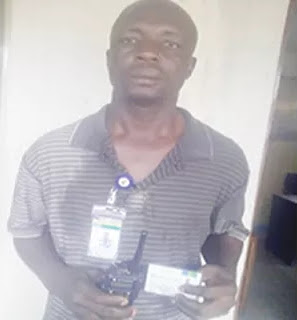 On Monday, a dismissed Police constable, Patrick Nkanu was arrested while trying to steal offering from the altar at SS Philip & James Catholic Church in Lekki.

He was struggling to open the money pouch around 5:30am when a security guard caught him.

He was taken to the priest where he allegedly confessed. See his confession statement below

“God made it possible for the church to catch me. He made it so because I went into his house to steal. It was a temptation, but I have learnt my lesson. I don’t even know how I would look into the eyes of my wife and tell her that I was arrested for going into a church.”

“I was serving at Badagry Police Station back then as a constable. I was sick and only took off for seven days. I sent a written note to my superior officer to tell him I was sick.

He lied that I took off for 75 days. The police lied against me. I wasn’t even given an orderly room trial before I was dismissed.”

The father of three was later taken to a police station in the area where he was detained.

He is facing sacrilege and impersonation.