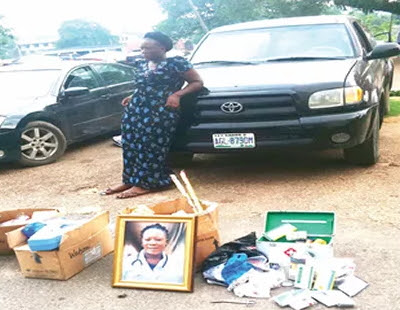 Mrs Damilola Ojo, a suspected fraudster has been arrested by the officials of Oyo State Police command in Ibadan.

The woman who claimed to be a gynaecologist at the University College Hospital (UCH), had duped many people, including Mrs. Funke Olagbaju Dollar. Ojo reportedly treated Dollar and her husband for infertility. She also defrauded many of her patients.

The suspect, who hails from Saki in the state, had operated two fake hospitals and was relocating from one rented apartment to the other in Oyo town and Ibadan in order to escape arrest.

The state Police Commissioner, Mr. Leye Oyebade, said the suspect was “popularly known in her church and in the neighbourhood as ‘Dr. Dammy Ojo’ until luck ran out on her when another member of her syndicate, Asifu Ajinikirun, who also allegedly defrauded her to the tune of N48 million, was arrested”. After collecting about N250,000 and administering injections on Dollar and her husband for about 12 times without any fruitful result, the fake doctor introduced her to an oil and gas business. Through that, she also duped Dollar of N1,350,000.

Narrating her ordeal to our correspondent at the state Police Command Headquarters, Eleyele, Dollar said she had been in need of a child for 12 years until she met Ojo who claimed to be a medical doctor at the UCH. Ojo, who claimed she just got pregnant for her husband, said her herbalist, Ajinikirun, who was preparing charms for her to make her hospital flourish, also swindled her of N48.5 million.

Nemesis, however, caught up with the fake doctor when a petition to the police from another victim led to Ajinikirun’s arrest. A man, Caleb Awokunle, whose house is beside Ojo’s hospital at Moniya, Ibadan, who was also duped of N22 million through the fake oil and gas business, was at the police headquarters where he recounted his loss.

Confessing to the crime, Ojo said she attended Ondo State Polytechnic where she studied Laboratory Technology but later veered into hospital management. Police report, however, claimed that Ojo might not have graduated from the institution because she was employed as a ‘Staff Nurse’ at Godswill Hospital, Oyo town with ‘To Whom It may Concern.’