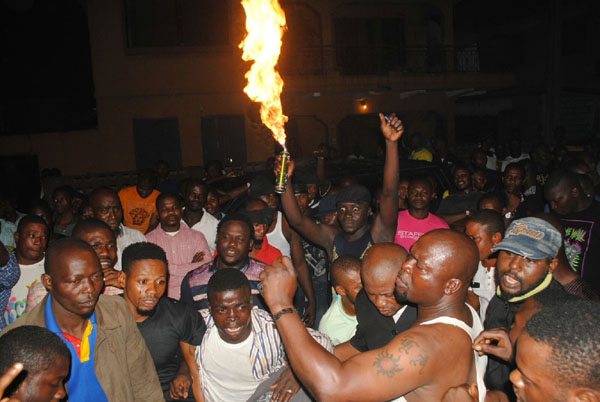 Mamowora (aka Mamok) was killed in a barber’s shop in Oshodi, Lagos, about three weeks ago.

Mamok’s colleagues, clad in black, with candle sticks marched round some streets in Oshodi.

They extolled Mamok’s virtues and rained curses on his killers.

A sympathiser, who did not want his name in print, told The Nation he is still in shock over Mamok’s death.

He said he was not surprised at the turn out, noting: “For you to know that he is a good person, a man after people’s heart, a procession was also held in his honour in London, Abeokuta and Ijebu simultaneously with that of Oshodi. Mamok was a renowned person “.

Alhaja Muditi Akinsanya Adenuga, the late Mamok’s elder sister, wondered why someone as humble as his brother was “murdered in cold blood”.

She charged the police to hasten their investigation into the case and bring the perpetrators to book.

“He was very humble, he never look for trouble. I still don’t know what sins he committed that made him die this way. His death was very painful to all. On this ill-fated day, we had a phone conversation; he promised he would come pick up a cloth from me after he is done with whatever he was doing, only for me to hear he was shot by unidentified gunmen, Mrs Adenuga said.

She added: “Oluomo has told us to leave everything in the hands of policemen; if not for this there should be chaos in Oshodi by now. We want the police to carry out their investigation quickly and anyone who has a hand in my brother’s death must be prosecuted.”

“I want to also use this medium to appeal to Governor Akinwunmi Ambode to do everything within his power to make sure normalcy returns to Oshodi; we want to see a peaceful Oshodi that would be free of crimes.”

Bode Egbeleye, who described the late Mamok as his “area brother”, and prayed for the repose of his soul.