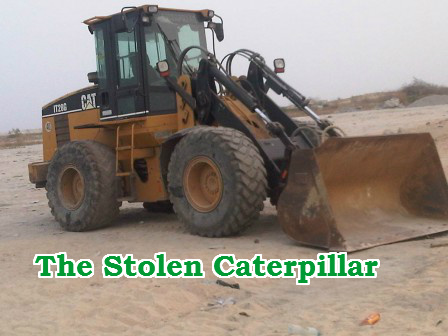 The police at the Bar Beach Division,Victoria Island, Lagos, western Nigeria, have arrested a driver, Amos Oladapo, 29, in Ogun State for allegedly stealing a Caterpillar payloader valued at N120m.

After it was stolen, the earth moving equipment which belongs to his employer, Cobel Construction Limited, was taken to Ogun State where it was sold for N1.5m.

Also arrested with the driver over the alleged crime are Abiodun Taiwo, 45, who reportedly assisted Oladapo to look for a buyer and Augustine Aiyegbeni, 48, the alleged buyer of the Caterpillar.

The police alleged that the incident occurred on 20 January, 2016 at Sanusi Fafunwa Street,Victoria Island, Lagos, when the driver was sent by his employer to use the Caterpillar with plate number FST 201 XL to work at Victoria Island.

The driver instead drove the equipment straight to Abeokuta in Ogun State to meet the second suspect, Abiodun Taiwo, who allegedly assisted him to sell itr to Augustine Aiyegbeni at give away price of N1.5m.

Following the incident, the complainant reported the matter to CSP Segun Ajamolaya, the DPO in charge of Bar Beach division, Victoria Island, about the disappearance of Oladapo with the caterpillar valued at N120m.

The DPO, it was learnt, directed a team led by Inspector Adenrele Stephen to fish out the driver and the caterpillar anywhere they could be found.
Following intelligence gathering, the police arrested Oladapo at Ifo area of Ogun State.

During investigation, the driver allegedly confessed that he stole the caterpillar and sold it for N1.5m with the intention to use the proceeds to travel overseas.
He led the police to arrest his two accomplices and recover the stolen caterpillar at a hideout in Abeokuta.

The police brought the three suspects and the caterpilar to Lagos, and after investigation, the three suspects were arraigned before an Igbosere Magistrates’ Court, Lagos on a three-count charge of felony to wit, stealing and receiving stolen property.

Police prosecutor, Sgt.Okete Ejima, said the offences the accused persons committed are punishable under sections 409,285(7) and 326 of the criminal law of Lagos State,2011.
The accused persons pleaded not guilty to the charge, and the presiding Magistrate, Mrs O. G. Oghre admitted them to bail in the sum of N1m each with two sureties each in like sum.

Oghre adjourned the case till 24 March, 2016 for mention,while the defendants were taken to Ikoyi prison pending when they will perfect their bail conditions.