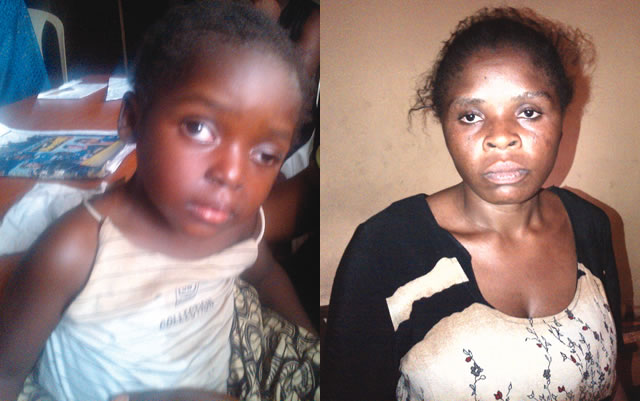 The police in Lagos have arrested a housewife, Grace Monday, for allegedly torturing her three-year-old niece, Miracle Peter, to a coma.

We learnt that Monday allegedly flogged the victim for several hours at their home in the Irepodun, Agege area of Lagos State and subsequently slammed her head against a wall causing the toddler to faint.

The offence of the toddler was that she always messed up the room with excreta.

Our correspondent learnt that Monday had been married for seven years without a child and had travelled to Kaduna sometime in July, 2015, to get the victim from her elder brother.

It was learnt that the toddler was always messing up the house with excrement and after verbal correction did not work, the suspect resorted to beating her.

On the day the toddler was beaten to a coma, she was rushed to a private hospital and was later referred to a general hospital in the state for intensive care.

Monday’s neighbour, Adijat Fatai, said she had warned her on several occasions to stop flogging the victim.

She said, “Miracle (Peter) always defecated all over the house. I called Grace and advised her to be patient with the little girl because it could be that God was using the girl to test her patience.

“Sometime in October, I saw her cleaning the child up after she had defecated; she was beating her as well. I warned her three different times to stop flogging her because it was getting excessive. She didn’t listen to me and I immediately suspected she was under a spell.

“I told her husband to caution her but he told me Miracle’s father instructed them to beat her till she stopped purging. I left them and went inside my room. It was the following morning she came to call me that the girl had fainted.”

We gathered that the landlord, Fatai Alimi, reported the matter at the Isokoko Police Division.

He alleged that Monday had inflicted several injuries on the body of the victim, adding that she slammed Peter’s head against the wall.

“We rushed her to a private hospital and I had to borrow money for her to be admitted and treated because the hospital management said we must deposit some money. She spent three days at the hospital. When they could no longer handle it, they referred her to a general hospital,” he added.

Alimi, who said Peter was placed on oxygen, added that she was incapacitated by the torture.

But a friend of the suspect, Alice Abuye, claimed that Monday did not slam her niece’s head against the wall.

Abuye, who claimed to be a confidante of the suspect, said she (Monday) had called her to express her frustration with Peter’s incessant defecation.

“Grace (Monday) loves little children. Unfortunately, she had been married for seven years without any issue. She said I should release my child to her so she could train her till she got her own but I refused. I told her to go to her village and get her relative’s child.

“On the night preceding the incident, she called me that the girl had started defecating again. After beating her, Miracle (Peter) told her if she confessed the reason for her misbehaviour, some spiritual forces would punish her. Grace and her husband prayed till 3am after hearing that.

“Around 8am, she woke up and saw that Miracle was still sleeping. She woke her up to give her a bath. She was about leaving the house when she saw the girl had hit her head against the wall. Grace did not touch her.”

Abuye told us that the victim had been discharged from the hospital and released to the family.

But the Divisional Police Officer, Isokoko Police Division, Badmos Dolapo, said she was in tears after seeing the victim.

“In all my years in the police force, I have never cried. But seeing the damage that had been done to this child, I could not hold back tears; I wept like a baby. She had been brutalised. We will not leave any stone unturned in this case,” she said.