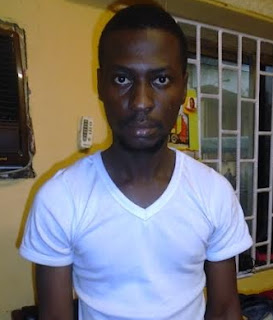 Emu – Larry Chidebere, a 28-year old man, has been apprehended by the operatives of Rapid Response Squad (RRS) of Lagos State Police Command, for being allegedly involved in United Arab Emirate’s visa racketeering in Ajah area of Lagos State.

The suspect, who hailed from Ika North Local Government Area in Delta State, swindled one Abraham Jude and four other persons of N2, 000.000 under the false pretence of helping them to procure a Dubai Visa.
According to Abraham, one of the victims, “when I was laid off where I was working in Abuja. I had intention of moving out of the country to start a new life. Then, I met his uncle, Samuel Obed, who told me his nephew was working with one company at the United Arab Emirate (UAE) and that he could help me to secure the country’s visa.

“We started to communicate via telephone, and he assured me that he could secure Dubai Visa for me at a reasonable price. He requested for N400, 000. 00, which I told him I can’t afford such huge amount of money at that particular point in time. Later, he called me again that his work place in Dubai was recruiting and he had already submitted my name for employment.

“Afterwards, he started to persuade me by telling me the benefits that are attached to the employment. As a result of this, I began to source for the money by all means, and at the end of the day, I got the N400, 000:00 and sent to him in Dubai through his Access Bank account number: 0029521100.
Abraham noted that, the suspect, after receiving the money developed hostile attitude towards him, and eventually stopped picking his calls whenever he put calls across to him.

“After two days he got the money, he stopped picking up my calls. Even if he managed to pick the call, he will just tell me I shouldn’t bother myself anymore that my money has gone down the drain. It was at this point, I came to RRS to report the case. And the Policemen told me anytime he is in Nigeria I should let them know”, he said.

It was gathered that the RRS operatives were on his trail for four months monitoring his movement between Nigeria and Dubai.
“After four months, I got a hint that he had arrived the country but had changed his telephone line. As fate would have it, I got his new line and handed it over to the RRS officers, they took up the surveillance from that end, which eventually led to his arrest”, he added.

In his confessional statement, he said “I can’t deny the fact that I collected the N400, 000.00 from him. I tried to secure the visa for him but all my efforts to do so were in vain. And I started to spend the money gradually till I finished it all”.

RRS investigators revealed that Emu – Larry has under the guise of helping four other victims from obtaining Dubai visa collected a total of N1.6 million from them, and that some of them only came forward when they learnt that he has been arrested.

While confirming the arrest, the Police Public Relations Officer of Lagos State, Superintendent of Police, SP Dolapo Badmus, said that Police will not rest on its oars in protecting rights of any individual in the country.
The suspect has been transferred to the State Criminal Investigation Department (SCID) for investigation and  criminal prosecution