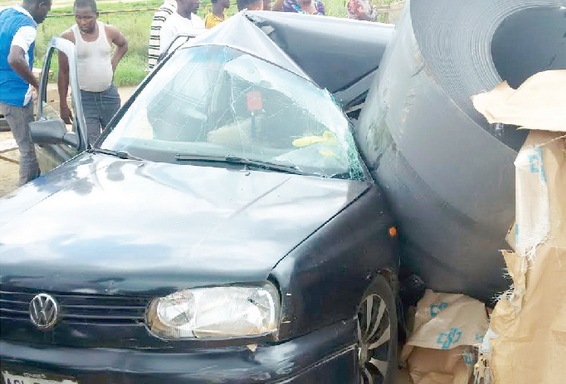 Pictured above is the scene of a tragic accident involving an heavy metal and a car conveying a family of 6 to Ogun State from Ibadan after celebrating Sallah.

A man simply identified as Baba Bilikisu, his wife and 4 children were inside the above car but when they got to Magboro bus stop the children felt pressed. Their daddy stopped and brought them out to urinate.

It was when they had gone out of the car that one of the steel rings in the trailer fell off and descended on the car.”

“The woman was saved by the ‘sharpness’ of her husband who suspected the steel ring would roll off the trailer and quickly rushed to car to bring her out.  It was by mercy of God that the occupants of the car were saved.”