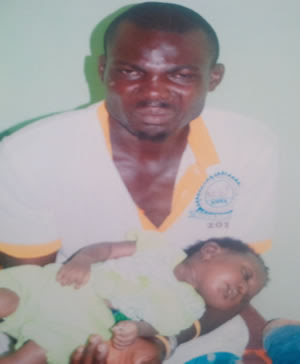 A confused man identified as Kazeem Olajide has been arrested in Lemode area of Ogun state for allegedly killing his 41-day-old baby in a desperate bid to divorce his wife.

Little Zainab Olajide was poisoned with pesticide by her father around 7am on Friday at Toluwalase Estate in Ijoke Abule area of Lemode.

The mother of the deceased child had left Zainab with her father to sweep the compound only to come back and met the baby foaming from the mouth.

Abosede Ogundare immediately alerted neighbours after she caught her husband with a baby bottle filled with pesticide.

The baby girl was rushed to the hospital where she eventually passed away.

The suspect attempted to flee the scene but was arrested by residents.