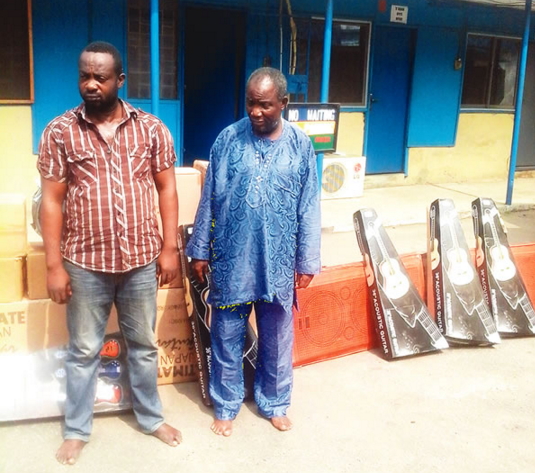 Amaechi and Benson Odefila were arrested on November 7 2015 following a tip off that a truck loaded with musical instruments had been stolen from Apapa area of Lagos.

The police went on the trail of the truck only to discover that the content has been sold for less to the Oyingbo trader.

“I did not know Odefila before now. It was a woman, an Alhaja, who was one of my customers in Oyingbo that introduced him to me. The woman said Odefila had a truck he wanted to dispose of. So, I contacted the driver.

“He asked me to pay N600,000, adding that the goods would be delivered to my store. I have my store in the Oyingbo area. I paid for the goods in two installments. I knew they were stolen goods, but I was tempted to get involved. My greed for profit drove me into this mess.”

Benson Odefila pictured on the right who hailed from Ondo State was the one who connected Amaechi to the deal.

“I am a transporter. I am not the driver of the stolen truck, but I was the one who found the buyer. He gave me 10 cartons out of the musical instruments as my share. It is true that I collected N600,000 from him.

“The original driver is Amass; he is on the run. I have not done this business before. Amass is notorious for diverting trucks from the Apapa port, but this is the first time he would send the goods through me.” – said 67-year-old Odefila after Police arrested him in Ajangbadi area of Lagos.