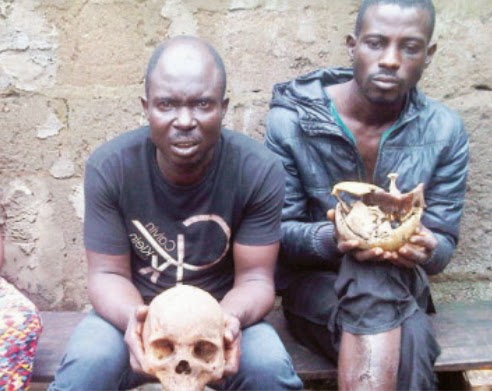 2 suspected human parts dealers who specialise in buying and selling human skulls in Ogun and Lagos states have been arrested.

The suspects identified as Sunday Oluyeba and Muritala Mustapha were caught by SARS following a tip-off.

The two suspects were arrested at the same location in Sagamu, Ogun state a week apart.

Lagos State Police Command said Mustapha, a 42-year-old man who was caught with 2 human heads in his house confessed that he got the heads from a friend he identified as Oluyeba.

After the police had arrested Oluyeba, 44, he also told the SARS operatives that he got the skulls from one herbalist, identified simply as Baba Ibeji, whom the police said was still at large.

During interrogation, the suspects, who were also herbalists, confessed that they bought the human skulls for N30,000 and used them to treat their patients.

Mustapha said the human parts could be used for the treatment of pregnant women having delivery problem.

He said, “I started out as native doctor in 1992. That was after my secondary school education. I was treating ailments such as diabetes, stroke, and hypertension. I treated barren women too. I knew Oluyeba about three years ago. He is also a native doctor. We paid N30,000 to obtain the human skulls from Baba Ibeji.

“I normally used the skulls to treat pregnant women who had problem with child delivery. We would grind these parts and mix them with some soap. That was all. On this particular occasion, I did not know I was being followed by a police informant. It was at the point of another purchase that they arrested me.”

The married father of one, Mustapha also said herbalists and traditional rulers in Sagamu have bought human parts from him for healing in the past.

Oluyeba on the other hand said he bought the human heads for his friend and not for his personal use.

“Yes, I collected money to get the human parts, but it was not for my use. I am a native doctor, but I use only herbs and soap. I knew Baba Ibeji as a human parts seller and I had warned him on several occasions to desist from the evil trade, but he refused.

“I am married. I have three children. I cannot use human parts for any concoction. This is an embarrassment caused by my friends.”

Baba Ibeji, a native doctor and human parts seller who is still on the run is a father of two.

Hear what his 35-year-old wife said:

“I only know him as a native doctor. I am his second wife. I sell provisions, and he does hunting and native medicine. He does not have money. He does not take care of his family. He has not given us money for the past three months. So, I doubt if he is into such things. Otherwise, we should be wealthy.”

Evil people dey plenty for this country. May God deliver us from them.