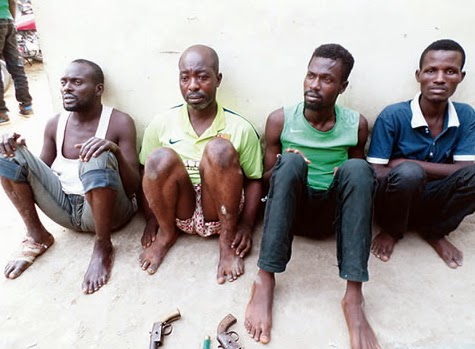 It was learnt that the suspects agreed to carry out the deed after they were promised N300,000 by their client.

PUNCH Metro learnt that the four suspects; Salami Afeez, Dare Akinyemi, Fatai Olunje and Taiwo Akinyemi; were apprehended in the Mushin area of the state on December 11, 2014, by operatives of the command’s Special Anti-Robbery Squad.

Our correspondent learnt that a police detective had gone undercover as a prospective client to be able to locate the hideout of the suspects.

The police revealed that the suspected assassins were hired to kill a Nigerian, who resided in London and was planning to visit home.

The police added that the cop, who contacted the gang, wanted to be sure that the gang had guns, and therefore asked them to produce their weapons, which the gang allegedly did.

Our correspondent learnt that the detective, however, led the police to arrest the gang members in their hideout before they could carry out the operation.

Speaking with PUNCH Metro, 23-year-old Afeez said their client promised to pay the gang N300,000 for the assassination. He, however, denied that they had always been assassins, adding that they were only enticed by the money.

He said, “The client had not told us who the victim was. What he initially told us was that there was an election operation which we would carry out for a politician. He asked me to get more people to handle it. So, I got the other gang members.

“We planned everything with the client, who we simply refer to as chairman, at a beer parlour on Awawu Street, Mushin. Later on, when we were arrested, we got to know that one of those people we were dealing with was actually a detective.

“It was not that I worked as an assassin. I stay on Mustapha Street, Mushin, with my family where I work as generator repairer. I am also a cult member. I was initiated into the Aiye cult last year October. It was the money that enticed us. The chairman promised to give us N300,000 for the job.”

Also, Akinyemi, 31, said he was a drug trafficker before he was introduced to the gang. He added that he, however, had yet to partake in any operation with the members.

He said, “I stay in Mushin. I deal in drugs. It was Taiwo who said he had a group which wanted to carry out a lucrative operation, and I should be a part of it. I told them that I don’t indulge in armed robbery, but they promised me a huge part of the money.

“On the day we were arrested, we were about collecting the N300,000 payment. Taiwo and I went to a hotel lounge in Mushin, and that was where the police arrested us. I have never killed before. This is my first time. We intended to spend the money for Christmas.”

PUNCH Metro learnt that the third suspect, 43-year-old Olunje from Ilorin, Kwara Sate, was the one who supplied the guns to the gang. It was gathered that Olunje, who worked as a local security man, bought the guns in 2006 without a licence.

Kareem, 37, who also hailed from Kwara, said he was deceived into going on the operation, because their client, who only named himself as Chairman, made them believe he was a well-to-do politician.

Our correspondent learnt that the police had recovered three rifles and a locally-made gun from the suspects.

The Police spokesperson, DSP Kenneth Nwosu, confirmed the arrest of the suspects, adding that investigations were ongoing.

He said, “The suspects have confessed to the crime. Investigation continues on the matter.”