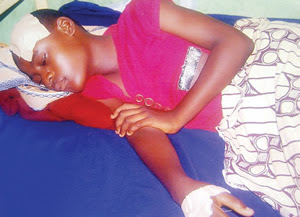 July 25, 2015 – Picture: How A Brave Girl Rescued Her Sister From Robber In Ede Osun After Parents Left Home

A nine-year-old girl, Zainab Oluwole, escaped death narrowly in the Oyo-Ode area of Ede in Osun State recently. Zainab’s mother, Adebukola Oluwole, a nurse at the State Hospital, Ede, was cooking dinner for her family to break their fast when she realised that she needed to buy some things and headed for the market.

Unknown to her, a burglar was lurking around the house and waiting for an opportunity to strike. The burglar invaded the house having seen that the man of the house, Mr. Raheem Kabir, had earlier left the house before the woman also left.

Although Zainab and her sister, Aishat, who is just seven years old, were intelligent enough to bolt the door as soon as their mother left, this still could not save them from the criminal’s attack. The criminal made several attempts to trick the two children to open the door for him but they refused.

He eventually broke down a part of the wall and crept in through the hole but Aishat was brave enough to escape and raised the alarm, which attracted some neighbours. The man fled but not before he inflicted a machete cut on the girl’s head. The girl only escaped death with her head chopped off by wriggling out of the man’s grip when he pinned her down and attempted to decapitate her.

Zainab, who still had plasters over her wound, narrated what happened that day. She said, “ The man peeped from the window and asked my sister and I to open the door for him but we refused. We wanted to escape through the back door but he heard the sound of our footsteps and came to the back door also. When we saw that there was no way to escape, we decided to hide inside the house.

“He broke down part of the wall and crept inside through the hole. He caught me but my sister sneaked out through the back door and ran away to call some of our neighbours.”

Zainab said that the man took her around the rooms and asked her where her mother kept money and other valuables in the house but she answered that she did not know.

After a futile attempt to steal money and other valuables, the robber threatened to kill the young girl and later dragged her towards the bush not far from the house.
The little girl said she started crying and the man lay her head on a boulder near the building and raised his cutlass with the intention of cutting off her head.

However, some of the neighbours, who had rushed towards the direction of her screaming, saw the man who was about decapitating her. She said she struggled with him and, broke free. The cutlass missed the girl’s neck but hit the left side of her temple, leaving her with a deep cut.
The neighbours decided not to pursue the fleeing armed man but rushed the bleeding girl to a nearby hospital where she was treated.

Zainab’s mother said the management of the hospital insisted that the family must notify the police and they reported the case at the Divisional Police Station in Ede.
Although the mother was still in shock when our correspondent visited their residence, she was happy that her daughter survived the attack.

She said,  “The strange man wanted to slaughter my daughter to avoid being identified. I am not sure whether he is a ritualist or a robber but I am thankful to God for sparing Zainab’s life.
“I am very happy that my daughter is alive today, because when I was alerted that something terrible had happened in my house, I thought my children had poured the hot food I was cooking on tbeir body, not knowing that something worse than that had happened.”