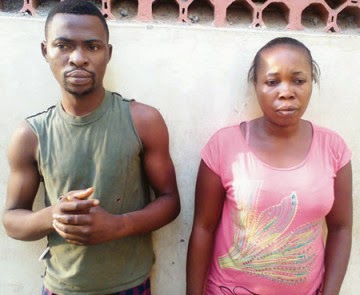 Feb 12, 2015 – Picture: Jilted Woman Hired Armed Robber To  Attack, Beat Up Lover Who Dumped & Forced Her To Get Abortion In Lagos

The police in Lagos have arrested a 32-year-old woman, Janet Effiong, for allegedly conniving with a suspected robber to attack a cab driver, who was allegedly her ex-lover and who had cheated on her.

Metro learnt that Effiong was arrested along with a robbery suspect, Femi Talabi, who helped her to carry out the operation.

They were arrested on Airport Road, near Ajao Estate, in the Isolo area of Lagos on Saturday, February 7, at about 7.30pm by policemen attached to the Rapid Response Squad.

They were thereafter transferred to the state Special Anti-Robbery Squad, Ikeja.

Our correspondent learnt that Effiong, who owned a restaurant in the VGC area of Lekki, had hired Talabi, who was one of her patrons, for N20,000 to attack her ex-lover, identified simply as Murphy.

Talabi had allegedly agreed to get two more men, and had collected N10, 000 as advance payment from Effiong.

It was learnt that on the day of the incident, Talabi reportedly contacted Murphy, who worked as a cab driver, to take him to Ajao Estate, with the intention of carrying out the attack on the road.

It was, however, gathered when Talabi brought out a toy gun to threaten his victim, the RRS policemen swooped on the two men and got Talabi arrested.

Effiong, who hailed from Uruan, Akwa Ibom State, said she hired Talabi to deal with her ex-lover because Murphy forced her to abort her pregnancy on two occasions and later abandoned her for other women.

She said, “I contacted Femi (Talabi) to help me deal with my former lover. Murphy and I had been dating since 2012. I lavished money on him, thinking he would marry me. He even borrowed N200, 000 from me and failed to pay back.

“He also impregnated me on two occasions and he forced me to abort them. I insisted I would not abort the third one, and he promised to take care of the baby. But it was a lie.

“So, I hired Femi to trace him and beat him up. Femi said he would get two other friends to do the job. I did not know he would go alone. I promised to pay Femi N20,000.

“I did not plan to kill my lover. I only wanted to punish him for neglecting me for other women.”

Also, 35-year-old Talabi who hails from Epe, Lagos, said the cab driver became suspicious as he wanted to attack him and a physical fight started during which attracted the policemen that arrested him and his victim.

He said, “I live in the Bariga area, but work as an Air conditioner technician in Lekki. I am not a cultist. It was Janet (Effiong) who contacted me to do a job for her. I knew her as a restaurant manager. She said the man was her ex-lover and had abandoned her.

“I called him to take me in his cab to a destination on Airport Road, Isolo, where the attack would take place. I was to pay him N7,000 for the trip. Janeth told me to only assault, and not to kill him. While in the cab, I lied that I wanted to ease myself and he stopped. When he did, I brought out a toy gun and wanted to hit him on the head, but a fight started and we as were struggling with each other, the police found out, and they arrested both of us.”

The Lagos State Police Public Relations Officer, DSP Kenneth Nwosu, confirmed the arrest, adding that the police had concluded investigations on the matter.

“The two suspects have also been charged to court,” he added.

[Reported By Olaleye Aluko,Metro Plus]