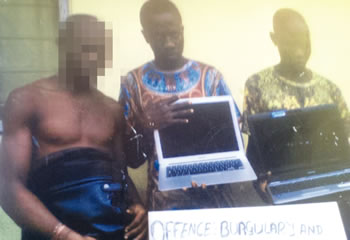 A man, who worked as a cleaner in a building on Tony Oghenejode Close, off Omorinre Johnson Street, in the Lekki Phase 1 area of Lagos State, has allegedly led a three-man gang to rob two residents ─ a lawyer, Adaku Ufere and her brother, Chukwuebuka ─ in the neighbourhood.

It was learnt that the cleaner, identified only as Jasper, connived with other suspects, Monday Daniel and Joseph Timileyin, to burgle the flat of the residents around 3am on June 23, carting away property worth N650,000.

Some of the stolen items include, two laptops, a wrist watch and an iphone.

It was gathered that the lawyer raised the alarm as the robbers left, leading to Daniel’s arrest by security guards. He was reportedly nabbed with the laptops and was handed over to the police. It was learnt that he later led the police to apprehend Timilehin.

PUNCH Metro learnt that the gang had carried out other robbery operations in the Lekki and Victoria Island areas.

The suspects reportedly confessed to taking part in the robbery of a businesswoman, Jolomi Etabuko, who lived on Ihuntayi Street, Victoria Island.

PUNCH Metro had reported on May 20 that one Yusuf Olalekan, who is now in remand at the Ikoyi Prison, and other fleeing accomplices, stabbed Etabuko multiple times after dispossessing her of valuables worth N2.2m.

Twenty-year-old Daniel, who hails from Cross River State, told the police that he had been involved in seven robbery operations within a year. He said his role was to stay outside and alert his members to the presence of policemen.

He said, “I am a labourer, but due to keeping bad friends, I have involved myself in series of robbery for one year now. Jasper, Wale (Timileyin) and I conspired to rob the complainant. It was Jasper, a domestic cleaner at a building on the street, that invited us for the robbery.

“In three of our robbery operations, my share was N38,000, N28,000 and N57,000 respectively. We sold the stolen items to one man at a market on the Lagos Island. I don’t know his name but I can identify him in person.

“Whenever we go out for an operation, my duty is to stand outside and watch. It is true that a few months ago Wale, Yusuf (Olalekan) and I went to rob Etabuko on the Victoria Island, but it was Yusuf who stabbed the woman before we escaped.”

In his statement, 22-year-old Timileyin, an indigene of Ogun State, said his wife had warned him against robbery. He said she relocated to Ibadan, Oyo State, when he refused to listen to her.

He said, “I’m a National Diploma student. My first operation was that of Etabuko. Only Yusuf (Olalekan) and I entered her apartment, but it was Yusuf who stabbed her.”

Seven counts bordering on burglary, stealing and robbery were preferred against the defendants by a police prosecutor, Sergeant Daniel Ighodalo, who arraigned them before a Tinubu Magistrate’s Court on the Lagos Island.

The charges read in part, “That you, Monday Daniel, Joseph Timileyin and others now at large, on June 23, 2015 at about 3am, on Tony Oghenejode Close, off Omorinre Johnson Street, in the Lekki Phase 1, Eti-Osa Local Government Area, Lagos, within Lagos Magisterial District, did conspire to commit felony to wit: burgling the house of one Adaku Ufere.

The defendants’ pleas were not taken by the court.

The presiding magistrate, Mrs. A. Tobi, ordered that the defendants be remanded in prison and their case file be transferred to the Directorate of Public Prosecutions for legal advice.

[Reported By AFEEZ HANAFI, Metro Plus]