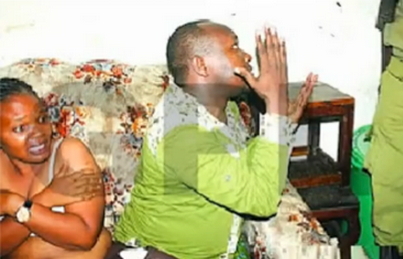 A 29-year-old house wife, identified simply as Vero, has been accused of infidelity in Irri community, in the Isoko South Local Government Area of Delta State.

Her husband, identified as Ben, on Thursday told the elders of the community that he caught his wife in illicit love affair in an uncompleted building.

Sources said Umukoro insisted that the elders must dissolve the marriage in line with the tradition of the Isoko people.

One of the sources said, Ben met with the elders of the community and asked them to dissolve his marriage to Vero in the Isoko tradition.

“He told the elders that the woman and her secret lover were caught having sex in an apartment in the outskirt of the community.”

It was gathered that the illicit relationship between the woman and the man had been going unnoticed by the husband before the bubble burst.

Our correspondent was told that after Vero and her lover were caught, some youths in the area manhandled the lover.

He was later summoned by Ben’s family and told to appease the gods according to the custom and tradition of the people, in order to avoid calamity that could befall the community as a result of the adultery.

The source added, “However, a fine of N50,000 was imposed by the family on the woman. She was subsequently banished from the house pending when she would comply with the directive.”