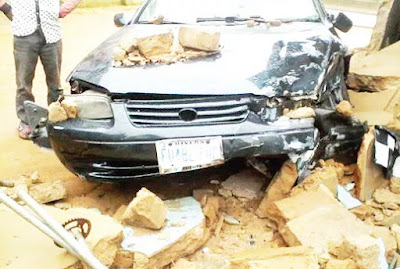 It was learnt that the late Ubom was a budding footballer contracted by a football academy in Lagos. According to sources, he was in Akwa Ibom State to attend his aunt’s funeral and was expected to return to Lagos at weekend.

Witnesses said the deceased had gone with his cousin, Aniekan, a nursing mother, to buy a mobile phone recharge voucher, when the driver swerved from the road, rammed into the shop where they were.

Ubom died on the spot while Aniekan is said to be in a stable condition in a nearby clinic. It was learnt that Aniekan’s legs were crushed and might be amputated. The driver, who escaped unhurt, was handed over to the police by the residents of the area.

When our correspondent visited the house of deceased, his weeping family members said they were not in the mood to talk.