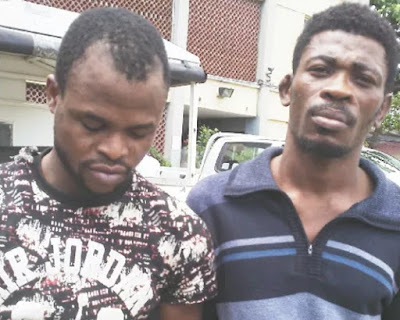 Officials of Lagos State Police command have arrested 2 members of an 8-man hotel robbery gang specializing in raiding guest rooms and robbing lodgers of their valuables.

The suspects identified as 30-year-old Kayode Johnson aka Badoo and 28-year-old Sheriff Owolabi revealed their modes of operation to the police.

Speaking on how they operate, one of the suspects Johnson said:

“Once we approach a hotel, we would bring out guns and threaten those outside. They would take us into the hotel. Each of us would start raiding rooms and lodgers. Whatever you get during that operation, is yours for the keeping.”

Further confessing his crime, Johnson disclosed that he was arrested at M.A.N Centre area, Ikeja.

“I was walking, I saw the police patrol team coming. When the police saw me, they said ‘Mr. Man, stop there,’ I quickly dropped the gun in my hand into the gutter.

I bought the gun myself for N20,000. “When we went for the Iju-Ishaga operation, we saw people in front of the hotel, threatened them with guns, entered the hotel and started robbing. I have participated in robbery of two hotels. I started robbery three years ago. During robbery operations of hotels, everyone looks out for his own loot.”

“We robbed a white man at Ikeja. It was Prince and I that went for the operation. We broke the man’s door and went inside. He was sleeping. We woke him up and robbed him of his dollars.

“But my girlfriend stole the dollars from me. She came to meet me at the hotel after the operation. It was my partner that told her that we got dollars from the operation. We slept together that night. I woke up in the morning to discover that she had fled with my dollars. Since then, I had not set eyes on her. “We stole 34 pieces of $100 bills. We shared it. I took 19 pieces and gave Prince 18 pieces.

The suspects said they have tried on several occasion to quit robbery but they found it very difficult.

Continue Reading
You may also like...
Related Topics:hotel, lagos, most wanted, robbers