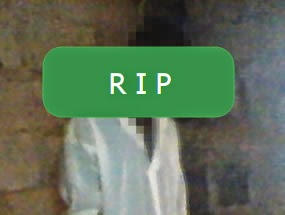 Area residents of Ile-Iwe community in the Meiran area of Lagos State say they were shocked to see the dangling body of a stranger in an uncompleted building in the area.

Some of the residents told PUNCH Metro that the victim was on Thursday brought down dead from the rope with which he hung himself.

They added that efforts by the people in the community and the police to identify him had proved abortive.

Our correspondent gathered that the stranger, who wore a white caftan, took his life between Wednesday night and Thursday morning after sneaking into the building in the night of Wednesday.

The incident happened on Lawal Unity Street, Meiran, Ile-Iwe bus stop. The uncompleted building is isolated from the rest of the houses in the area.

A resident, Adebayo Salami, said nobody knew the man and attempts to find his relatives had not yielded any result.

He said, “I was called on Thursday morning and told that somebody had died in a building.

“My initial thought was that it was somebody living in the area, but when we got there, we discovered that it was an uncompleted building and the man was a stranger.”

Salami added that the victim might have committed suicide to cover up a secret or run away from a consequence.

A community leader, Samuel Oroja, said the traditional ruler of the community had been informed of the development and plans were on to conduct rites to forestall a recurrence.

“I have called some other elders, including the traditional ruler, to notify them so that we can know what to do about the corpse.

“Nobody knows the man or where he came from. We have reported the matter at the Meiran Police Station.

“What we will do now is to prepare rites and make sacrifices to forestall a recurrence of unnatural death like this because this is a bad sign for the community,” he added.

However the Police Public Relations Officer, Kenneth Nwosu, said the police had identified the victim as Mosunmola Raphael, a 28-year-old man.

Nwosu said, “His relatives came to identify him and they said he had mental problem. His corpse has been released to the family after they presented some documents.”
[By Samson Folarin Punch Metro Plus]