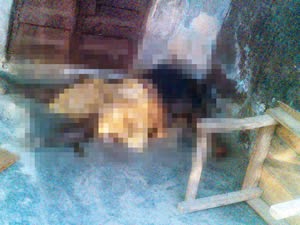 A woman has been strangled to death by suspected ritualists, who also cut off her private parts.

Her corpse was abandoned on Oniyanrin Street in the Mile 12, Ketu area of Lagos State.

According to Metro, the people living in the area discovered that there was no gunshot wound or stab injury on the body, except that she was dead and her body part cut off.

The corpse was laid in front of a shop and was covered with clothes.

A resident, Mr. Abayomi Odegbami, told our correspondent on Monday that the unidentified woman was a regular face in the community, and usually slept in one of the shops.

He said, “Nobody knows exactly what happened to her.

“This incident happened on Saturday and the corpse is already decomposing. We have been calling the emergency numbers for some time now, and they have not come around.

“Our fear is that the corpse could burst and spread disease in the area.”

He added that such incidents had become a common sight in the area, adding that a similar one was recorded last year.

“I believe it has a ritual undertone and may not be unconnected with the coming elections because a similar thing happened last year and it was a man. A part of his body was also removed while his corpse was abandoned,” he said.

After the matter was reported to policemen at the Ketu division, our correspondent learnt that emergency officials later arrived around 4pm on Monday to pick up the corpse.

A source in the area said the officials insisted on collecting money before they could evacuate the corpse from the scene.

He said, “They said they also heard about it on Saturday.

“They said we should pay them before they remove the body. Where do we get the money from?”