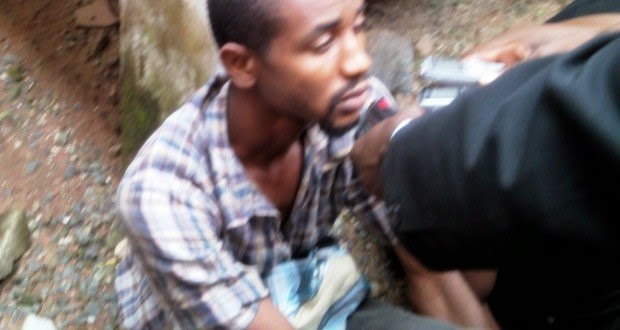 A 27-year-old Undergraduate of Madonna University identified as Chijioke Ezebuiro has been arrested for the alleged murder of his father.

According to a witness, Chijioke who has threatened his 87-year-old father, Emmanuel Ezebuiro on many occasions killed him on the 30th of June, 2014.

Speaking with newsmen in Umuahia, the Police Public Relations Officer (PPRO) ASP Geoffrey Ogbonna, who paraded the suspect alongside other cultists and robbers, said that Chijioke Ezebuiro is the prime suspect as he was the only person in the house at the time of his late father’s death.

Ogbonna said that the death occurred on June 30, 2014 at the deceased home at Umuoriehi, Isingwu in Umuahia North local government area and was reported to the police by one Ezebuiro Chimezie of the same address who said the deceased had been bed ridden for some years.

He said that on the fateful day he (Chimezie) had left him in the house to drop his children in school and that when he came back, he met the deceased on the ground in his own pool of blood and quickly called the deceased personal doctor who confirmed him dead.

The PPRO said that the complainant had told the police that when he left the house to drop his children, the suspect, Chijioke Ezebuiro, his younger brother, was the only one in the house when the incident occurred, adding that the suspect had threatened his father’s life a number of times.