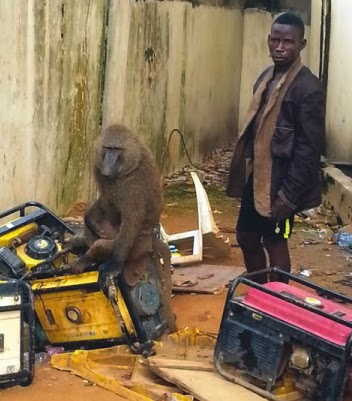 Lagos State police com­mand, Ikeja, now have in their custody a 26-year-old man, Mohammed Rafiu and his 10-year-old monkey for alleged robbery.

Rafiu is accused of using monkeys and snakes to scare his victims who for fear of their lives will drop their bags and run. Both the suspect and the monkey were arrested at Ogba, Lagos, shortly after allegedly robbed one of their victims of N240,000.

Rafiu and others at large were alleged to have trailed their latest victim who just emerged from a bank at Ogba, and un­leashed the aggressive monkey on him. Rafiu, along with one of his partners, Sani, allegedly grabbed the victim’s bag and at­tempted to flee. He succeeded in handing over the bag containing the money to Sani before he (Rafiu) was arrested by the police at the scene.

At the police station, Rafiu confessed that he relocated to Lagos when he learnt that his business would do better in the city.

His words: “I normally sell herbal mix­tures in Kano and to attract customers, I al­low my monkey to dance to the amazement of passers-by. This will attract their atten­tion and give me the opportunity to sell my drugs. In 2005, my brother returned from Lagos and told me that I am wasting my tal­ent in Kano.

“He advised me to travel down to Lagos with the monkey. Since I knew that I was going for a better opportunity, I bought a new monkey making it two. Just like he predicted, business was booming till 2010 when it started dwindling. They were so many herbal doctors everywhere. We could hardly make N2, 000 in a day. Life was be­coming difficult that I could not send money home.

“I was even contemplating to travel back to Kano when an incident changed my deci­sion. We were heading back after a stressful day, when my monkey jumped on a woman and she left her bag and fled. I called her in an attempt to give her the bag but she kept running. Since no one saw what happened, I kept the bag and later discovered that there was N30,000 inside it. I was very happy and shared the news with my colleague who was into the same monkey business.”

According to Rafiu, they decided to ex­plore the newly discovered trick. “We nor­mally operate at night when no one will notice that we are there. We made good money and gradually we introduced the use of snake. No normal person will take a pin if he sees a snake is about to bite him. We had to stop using the snake when we nearly lost control of it during an operation. The snake did not stop when we ordered it, I had to kill the python to save the man.”

On the day of his arrest, he said that they came with their car towards the bank. “We waited till we saw a man stepping out from the bank with a bag. We followed him be­hind till he left the bank area. I then stepped out with the two monkeys with us, while Sani, my partner moved closer to him. I or­dered the monkey to scare him and he threw away the money and ran for safety. As fast as we could, I picked the money and threw it to Sani who rushed into the car. Unfortu­nately passers-by saw what happened and started stoning me. Sani ran away with one of the monkeys while I was mobbed by some angry people. It was God that saved me when two policemen came and rescued me. I would have died there. I thank Allah”

On how he recruits his workers, Rafiu said that he does not have a permanent part­ner. “In the past 10 years, I have worked with several persons. Sani just joined me two years ago and so far we have made a lot of money together. I am terribly sorry. I will go back to Kano and continue my business. I was making money on sex enhancement drugs, before the devil came up with another suggestion.”

Confirming the arrest, Lagos police com­mand spokesman, DSP Kenneth Nwosu said that the police is still on the trail of the oth­ers while the suspect and the monkey will be charged to court at the end of investigation.