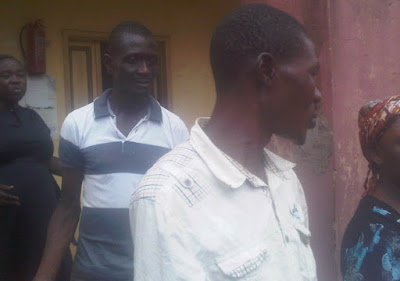 Pictured above is 28-year-old Nurudeen Sulaimon, a married father of two whose wife just put to bed.

He allegedly stole SMS Gold Baby food valued at N45,570 on Easter Monday at the popular supermarket along Igando road in Lagos.

The suspect went into the supermarket not knowing that there were CCTV cameras installed inside the hall.

After he stole the items and attempted to leave the place with the items, the security man on duty accosted him and he confessed.
He was handed over to the police at Igando division where he reportedly told the police that his wife delivered and needed baby food for the new baby.

He blamed the rift between him and his wife for the theft.

Sulaimon said he had no money to buy food their newborn baby and has been trying to please his wife.