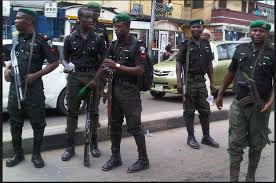 Bayelsa Police Officials have foiled an attempt by a five-man gang to rob a GTbank in Yenagoa, the state capital.

It was gathered that one of the gunmen was killed in a shootout with the policemen guarding the bank.

The suspected robbers were said to have scaled the fence of the bank on Monday at 11:50 pm and opened fire on the policemen on duty.

But the police reportedly fired back, killing one of the gunmen while four others reportedly fled with bullet wounds.

Police spokesman Butswat Asinim, confirmed the incident in a statement yesterday in Yenagoa.

The statement said: “On March 27, at 2250 hours (10.50 pm) five gunmen scaled the fence of a new generation bank building at Kpansia, Yenagoa Local Government, and opened fire on the policemen on duty.

“The policemen fired back at them, killed one of the gunmen and recovered a single-barrelled cut-to-size locally-made gun. The other robbers fled with bullet wounds.

“The body of the suspected robber was deposited at the morgue of the Federal Medical Centre, Yenagoa. Efforts have been intensified to arrest the fleeing suspects. Investigation is on.”