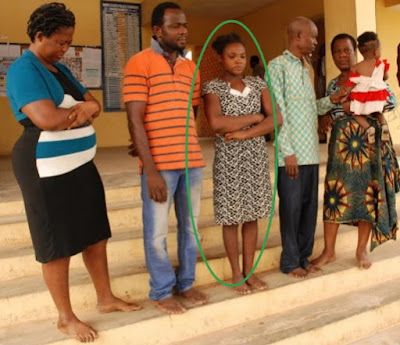 A pregnant teenager who was lured from her base in Akure Ondo State by a child trafficker has been rescued.

17-year-old Tessy Obianua left her father’s home with pregnancy in January 2014. She came back 9 months later with no pregnancy and her baby.

Her father reported her to the police and during investigation, it was discovered the lady had sold her baby girl to a couple in Onitsha. She got N30,000 and some clothes as proceeds from the sale of the baby.

One Chibuzor Okoye, a notorious child trafficker allegedly took Tessy to live with a childless couple (Mr & Mrs Sunday Kalu) in Onitsha where she was nurtured until she delivered her baby.

Tessy confessed to the police that she was later given N30,000 and clothing after which she departed Onitsha to her father’s house in Akure.

“Through investigation to Onisha, the police arrested Okoye at No. 3, Tonny Olisa Street, Awada in Onitsha, who specialised in child trafficking. “It was Okoye, who sold the said baby girl to the couple at No. 8, Uzogwu Street, Onitsha for N500,000.

“She claimed to have given Jude (Azuka) N200,000 out of which Jude claimed to have bought clothes and shoes for Tessy and also gave her N30,000. “Mrs. Okoye thereafter forced Tessy to sign an undertaking that she would never come back for the baby.”